We are back home again now and the garden needs a bit of TLC. I get all around the beds with the strimmer mower cleaning all the paths and edges and then plant out the summer vegetable seeds and seedlings. Because there is always the possibility of frosts until November, we put a few temporary cloches over the most sensitive seedlings to give them an early start. 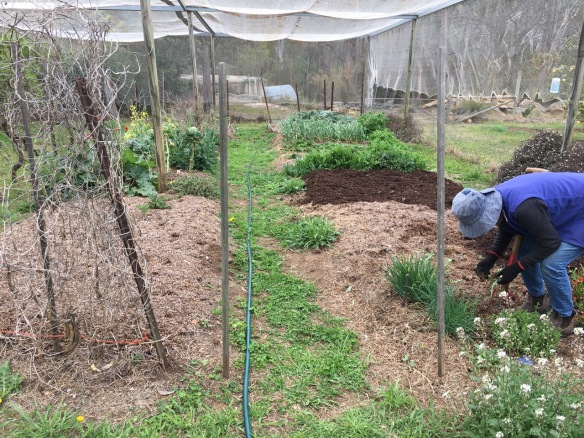 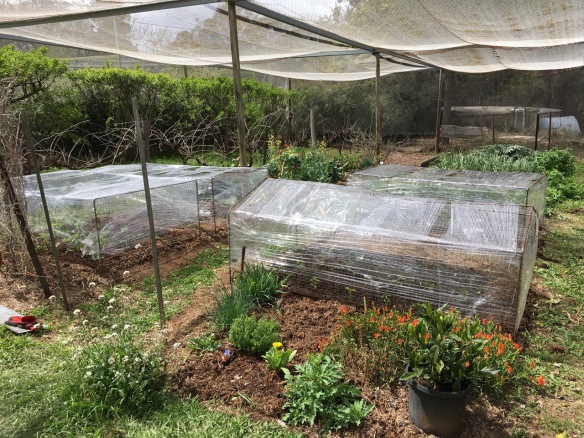 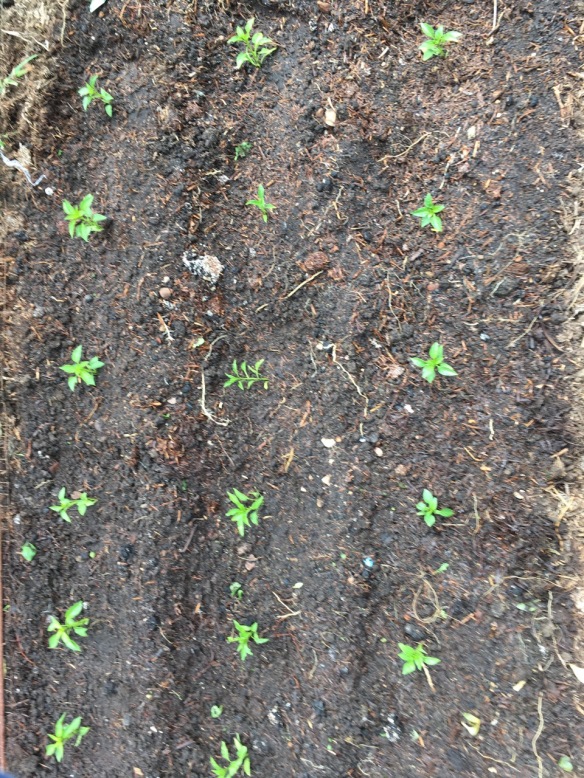 The early poppies are starting to bloom now, always a good sign of the warmer weather. 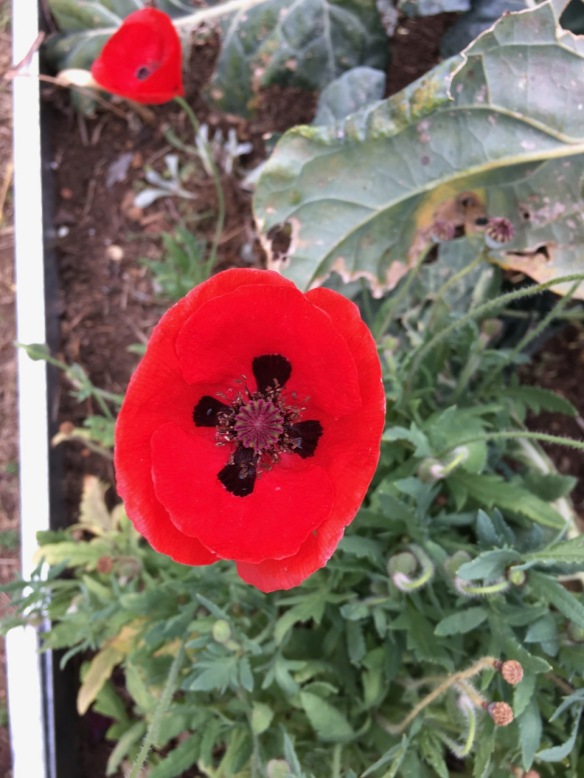 While the long wood firing is in progress, there are simultaneous demonstrations of Moon Jar making by 3 exceptional makers. These mysterious white porcelain globes, have fascinated people for centuries, including potters in the West like Lucie Rie, and Bernard Leach.

There is Mr Cheol Shin, The traditional potter who we met a week ago in his workshop while he was wood firing. He is the maker who threw 1000 jars to learn how to make them well and with feeling. He tells us that it was only after that epic effort, was it that he felt confident that he could interpret this elusively simple form with sufficient understanding and confidence to do them justice. He is such a confident thrower, that he makes a dozen ‘halves’ on the first afternoon and then with time up his leave, he make 20 large dishes as well. 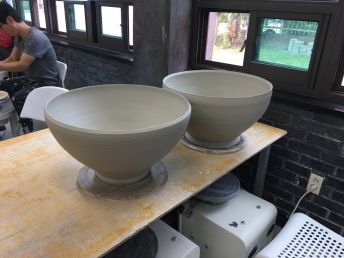 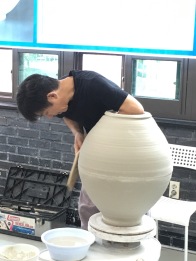 Mr Changhyeon Jeon,  makes Moon Jars with a modern, humorous take on the ancient tradition. His work is great fun, although to my mind he seems to be taking the whole forum very seriously indeed rarely smiling. It seems to be Mr Cheol who is cracking all the jokes during the throwing demos. He is very relaxed and very confident. Mr Changhyeon, on the other hand works on quietly, being very careful and studious. He isn’t interested in volume, only making two jars in total, but each with applied sculptural additions. He has been developing a long series of moon jars with little whimsical horses, that climb up on his pieces and bite a chunk out of the rim. He was commissioned to make a number of pieces for the Korean Pyeongchang Winter Olympics last year. In that series, his horses broke off pieces of the rim of the jars and made skies, snow boards and a luge, then took off down the steep sides of the pots. 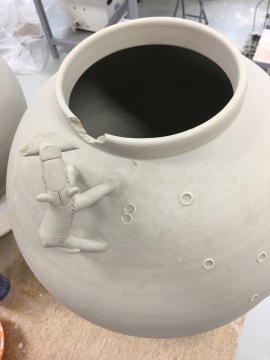 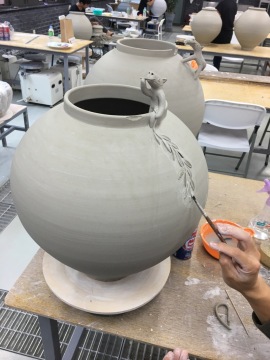 And then there is Mr Jung Hong Park, he makes Moon Jars with a very modern twist. For a start, he is working with black stained porcelain. His technique is to transfer high-definition, digital NASA images of the moon’s surface onto his forms. The detail is stunning and the time it takes to create the image is astonishing. I watched him work on and off for the 3 days and he managed to finish just a couple of square inches of the image. I congratulated him on the effort and he told me that this was only just the first layer of slip inlay, He will come back over it and inscribe another layer – or more. He works with ten different colours of slip, graduated from white to black, to get the fine-grained digital effect. He told me that he will spend up to 2 months to finish the image. Making the form for him is less important, it’s all about the totality of the enterprise, of which the image plays an important part. I’m impressed by his ability to concentrate and apply himself to this sustained project over such a long period of time. 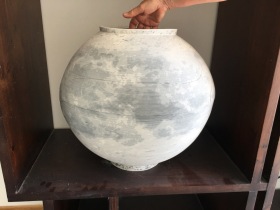 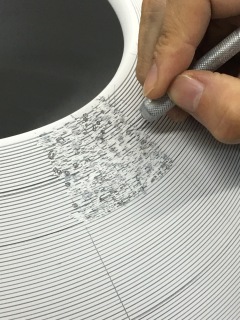 After work, on the way to our accommodation, we pass the local co-op. The light is on and I can see a lady inside working. I go in and see what she is up to. There are a number of machines in there, some are clearly for working with chilis. There are machines specially for removing the seeds, others for course. medium and fine grinding the powder, depending on the desired outcome. 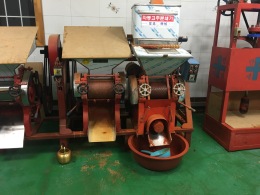 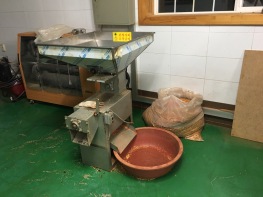 Tonight she is renting the oil processing machines. She has brought in her crop of ‘perilla’. I grow a variety of this plant at home myself. I call it ‘shiso’ and use it in salads, as a garnish and as an ingredient in pickles. It has a very distinctive flavour. The variety grown here is not the same and tastes similar but different. Here however they let it grow to full maturity and let it go to seed. The seeds are collected and pressed for their oil. They call it wild sesame here because the oil taste very similar to sesame oil, only milder and slightly sweeter. The mature leaves are used along with lettuce leaves to wrap the meat and pickles in the dish called ssambap. 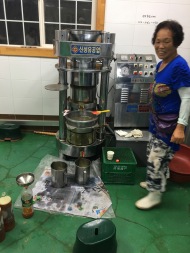 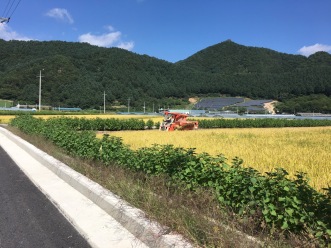 We see a hedge of perilla growing around the edge of a ripe crop of rice being harvested, and some real sesame being dried on the pavement in the village along with other recently harvested crops of chilis and herbs spread out on tarps to dry. You don’t want to see a good bit of unused pavement being wasted on a nice sunny day in autumn. 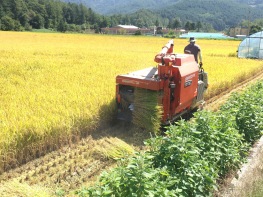 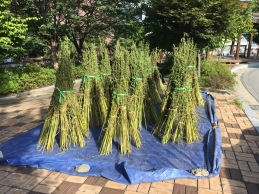 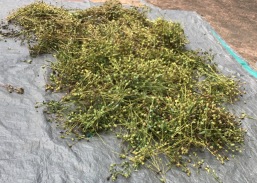