We have another weekend wood firing workshop. Another amazing group of wonderful people. Everyone so engaged and enthusiastic. I have to cut split and stack more wood. Prepare the kiln and its furniture, kiln shelves and props. Check out all the fittings and structural elements to make sure that it all goes smoothly. The fire box lid lining is on its last legs, but will last a few more firings. It takes a few hits from our enthusiastic new stokers, with well-meaning, but miss-placed logs at high temperature. 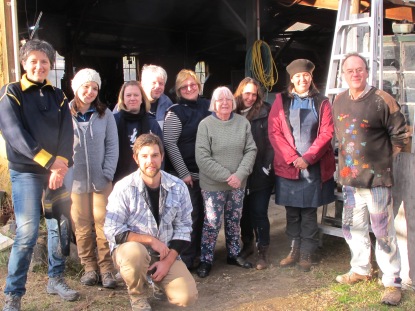 Before we can fire the kiln again, There is maintenance to do. I have to get inside the fire box of the kiln to chip out the molten ash glaze slag from the last firing. This has to be done after every firing. The ash from the firing collects in the base of the firebox and accumulates to the point that it melts into a molten slag at the high temperatures at the end of the firing. It forms flows of liquid natural ash glaze that pool into the floor bricks. This is the same natural ash glaze that decorates our pots during the wood firing and gives them their distinctive wood-fired look.

There is alway some minor repair work required after each firing . Sweeping out the dusty ash and charcoal, chipping out the slag that threatens to block off the air holes. This is normal maintenance. However, when I get inside the firebox this time I see that the last firing had such fluid ash glaze formed at the end of the firing that it has run and pooled into the very important mouse hole in the base of the ash pit. This hole is most important to keep the ember level under control during the firing. It has to work properly, otherwise I can’t control the fire as easily and everything could go pear-shaped.

On close inspection I find that the ash glaze slag has completely filled the air hole and sealed it off completely. To avoid this occurrence, I place a special little kiln shelf ‘lid’ over the hole to deflect most of the ash to the periphery of the hole and this usually works. But the combination of wood that I have used this last time has created a very fluid slag and every thing had disappeared into a grey/brown puddle of lava. I can’t even see the ‘lid’ or the hole beneath it. I work on the principal that I know that it is under there. I have to climb into the firebox base armed with a 2 kg hammer and cold chisel, a crow bar and a skutch hammer. I have protective goggles over my glasses and a dust mask as I set to work in this cramped space, hammering and chiselling as best I can without being fully able to swing the hammer properly. I bash, chip hammer and prize my way through the glassy, lava-like slag. It is brittle and smashes into jagged, conchoidal, shattered spalls. Bits fly everywhere. It’s in my hair and all through my clothes. I have to be careful not to cut my fingers trolling through the pieces, tossing them back into a bucket in the kiln chamber. I finish by sweeping up the small fragments and dust. It’s a crap job, stuffed into this small space with all the dust and sharp edges, but it has to be done and no-one else, including the kiln fairy, is likely to volunteer. I keep putting it off, hoping that the kiln fairy will do it, but no such luck there. It’s all part of being self-reliant. I often put it off till the last minute, because I just don’t enjoy it, other times I get stuck into it first thing. It all depends on my energy levels and state of mind. There is no avoiding it. It just has to be done.

Although it doesn’t look it, it’s actually all cleaned out and ready for more work.

I’m lucky and very grateful that this is the worst job that I have to put up with. It’s certainly the least glamorous job in the pottery. It’s all very well, sitting in the sun being creative and making lovely things that are visually engaging and wonderfully tactile. Unpacking the kiln is like Xmas, but no-one daydreams of all the hard graft that goes into ‘creativity’. Don’t give up your day job!

We have a -2 oC frost overnight, during the firing. It keeps us sitting up close to the kiln during the midnight to dawn shift. Our European friends will call us pathetic wimps. That isn’t cold! Minus 40 is cold. I know that, but we are in Australia, the land of heat and sunshine, draughts and heat waves and not used to the severe European cold. Minus 2, certainly felt cold enough to me. If it got colder than this on a regular basis, I’d build a different shed. One that had walls!

A quick walk around the garden reveals that the last 2 rows of very late potatoes in the garden have now had it. The frosts are coming regularly now. Not severe, but light and regular. I think that this must put an end to these spuds, but they still have a few green leaves. I don’t need the space just now, so will leave them to their own devices, till spring. I can’t see anything coming of them. However the single red Flanders Poppies growing among them seem to love it. 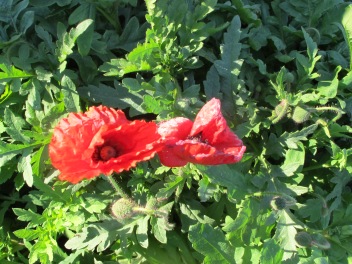 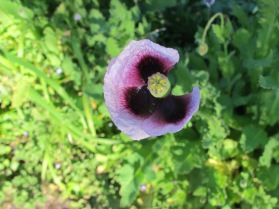 There are lots of pretty images in the garden of leaves tinged with white frost and ice crystals. The ground crunches under foot as I walk about. There have been several frosts like this one now. It’s good. It will finish off a lot of bugs like the fruit fly, that can over winter in milder climates. This ‘chill’ will help all the old varieties of fruit that need their winter chill to become fertile in the spring.

I walk down to the Pantry Field garden. It’s situated down at the bottom of our land, in a clearing in among the tall eucalypts. the tree cover of the tall crowns gives a modicum of protection. I have a quick look around and see that the frost hasn’t penetrated here as yet. The big potato crop is still doing just fine, no frost damage. But on closer inspection I see that a lot of the tender tops of the plants aren’t burn’t off, but completely missing. Nibbled off by our resident Eastern grey kangaroos that wander through here attracted by the grass, tree cover, undergrowth protection and the availability of 4 dams to choose from for water. No wonder that they hang around. They treat the place like they own it, and they do! They were here first. We haven’t fenced our land at the boundaries at all. It is all open for them to pass through and enjoy. What we have decided to do is to fence off the various islands of garden and orchard, to keep some possibility of getting a crop to ripen. These plants haven’t been attacked till now, so now is the time to do something about it, If I don’t, they all be gone in a week or so. 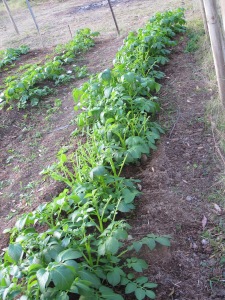 I make it a priority to extend the fencing wire up to 1.5 metres. Up until now we had got by with only rabbit proofing fencing. Wire mesh that we could step over. Now I need to make a taller fence with a walk in gate, plus an openable end to allow the tractor to be able to get in and out for tilling once a year. While thinking all this through I see that there are another crop of mushrooms coming along. I can count about twenty or more. We’ll be changing our diet slightly now and for the next few weeks to include Mushroom soup, mushroom sauces, mushroom risotto, mushroom in white sauce and eggs and bacon for that leisurely late brunch. If we can find a day that we can declare to be leisurely?

Fond regards from the old fun-gi