Before we head off to have out Xmas lunch, we are up early to harvest the summer largesse from the garden and orchards. We have been picking a few nice red tomatoes each day since mid December. Our earliest crop ever. Due largely to the fact that I started them off under an improvised cloche in September before we went overseas. This beat the frosts and kept them warm to get them started off earlier in the year. It’s the first time that I have attempted this and it has worked very well.

Now we can harvest a basket full of tomatoes each week. So we have been making small amounts of Tomato passata since the week before Xmas. This morning I put on a Jan Garbarek CD and settle in for an hour to shell a big bowl full of beans the have got away and are not as nice as they could have been if I’d got to them earlier. I have been picking, blanching and freezing them each week to keep up. There are some big scarlet runners, some lumpy french climbers and smaller bush beans. I need to harvest them every couple of days to keep them flowering. Today I decide to shell the larger ones and cook them down into a dish of beans in Tomato sauce.

Janine has been chopping and mashing the bigger ripe tomatoes in a large copper boiler to render them down for more passata. This is pretty simple to make. We just cut up the tomatoes, Place them in the pot and mash them with a potato masher and let them boil down in their own juice. After they cool, we will put them through the kitchen sieve to remove the seeds and skins, before re-heating to concentrate the flavour and them vacuum bottle them for later in the year. 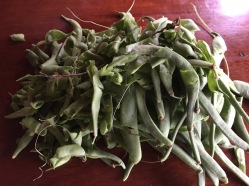 I steal a ladle full of her tomato sauce and add it to the beans in a small pot and add a tiny knob of our home-grown garlic and one of our dried chilis. I set it one small burner to slowly simmer and get stuck into slicing all the small tomatoes in half for drying. It’s a cool morning, so it’s OK to have the stove on.