We had two wood firing workshops booked for this weekend.

Sadly we have 29oC and windy conditions. So there is a Total Fire Ban declared for the weekend. The fire season has started early! A total fire ban is a TOTAL fire ban! There is nothing that we can do about it. We have to cancel both workshops. Now that the hot weather has arrived early, it may affect the next two weekends that we have planned on our calendar for a Stoneware wood firing and the last raku firing.

Running workshops right up to the end of the season like this does increase the risk of running into fire bans. Some groups actually ask to be booked right at the end of the firing season to take advantage of the longer day length for travelling here and also the warmer daytime temperatures.

I’m NOT a climate sceptic. I believe that we are experiencing man made climate change caused by our use of fossil fuels.

This winter in Australia was 2oC above average winter temperatures across Australia. If this is our new reality, then we had better get ourselves adapted. In the short term. It means only booking wood firing workshops in the middle of winter when it will still be safe to do so, as I hate letting people down. In the longer term, we have been adapting for many years now. Collecting all our own water for drinking and irrigation, dealing with our own sewerage and generating our own solar electricity. This is all still a work in progress.

To this end, I suddenly realised that I had an unexpected day ‘off’ yesterday with the sudden cancellation of the workshop. We had been busy all week preparing the site, the glazes, the wood fuel and the sawdust. We have ordered a new, 2nd generation Tesla battery for our house, as we have an excess of electricity during the day from our solar panels. For the past 10 years, we were able to sell this excess power to the grid at a good price. But now with the end of the subsidy. It is better to store that excess and use it ourselves later in the evening, when we usually buy in green wind power back from the grid.

The announcement of the new Tesla battery came at just the right time for us. We are going to electrify all our energy use in the house and pottery. That means no longer using LP gas. Our choice to use an LP gas stove in the kitchen as a fall back position for cooking during the very hottest months, instead of lighting the wood stove, was based on the proposition that LP gas burnt directly, was greener than using dirty black electricity generated from coal.

We totally withdrew from the coal economy 10 years ago. In keeping with this thinking, we have ordered another 3 kW of Australian made solar panels from ‘Tindo’ in Adelaide. These are tier 1 grade panels, made to the highest specifications. Our original 3 kWs of panels were made in Sydney by BP Solar (since closed) and have performed very well for the past 10 years. It is great to know that we can still buy Australian made solar panels. They are 10% more expensive than the best tier 1 panels from China, but we are employing Australians and that makes it worth it.

Once our new panels and battery are installed, we will replace the gas stove and go fully electric. We have had solar hot water on the house since we built it in the 80’s. We fire all our glaze work in the wood kilns and bisque in the electric kiln. However, before I can install another 3 kiloWatts of solar cells on the pottery roof. I have to remove all the old rusty ‘galvanised’ roofing and install new ‘zincalume’ sheeting, as these are compatible with the aluminium framed solar panels. I had ordered the new roofing last week and it arrived on Friday, along with the 6 lengths of hardwood beams that I also need to add to the roof structure to accommodate the solar panel mountings.

It wasn’t the nicest job that I have ever attempted. I fact it was up there with the worst. But it was an unexpected day ‘off’. So I didn’t want to waste it. Pulling an iron roof off in a strong wind isn’t good. Doing timber framing up there on your own with heavy hardwood beams isn’t easy either, then finally re-roofing shiny reflective zincalume in 29oC heat isn’t at all nice. But now it’s all done and the new roof is ready for the contractors to come and install our new solar panels.

The ladder work and hard wood roof framing, has really taken it out of me as well as the heat and I have to lay down afterwards. I’m getting too old for this. But the thought of having electrical independance with 6 thousand watts of solar power and a 15 kW/hr battery kept me at it.

The old galvanised roofing on the pottery and kiln shed was 100+ years old when we reclaimed in 1983. It’s doing really well for a 140 year old iron roof.

We had already replaced the top half (right hand side of image) of the roof with new zincalume sheeting in 2007, when we installed the original solar panels. Now it’s time to fill up the remaining roof area. It’s a perfect situation for solar collection of a 30 degree pitch roof facing due north. 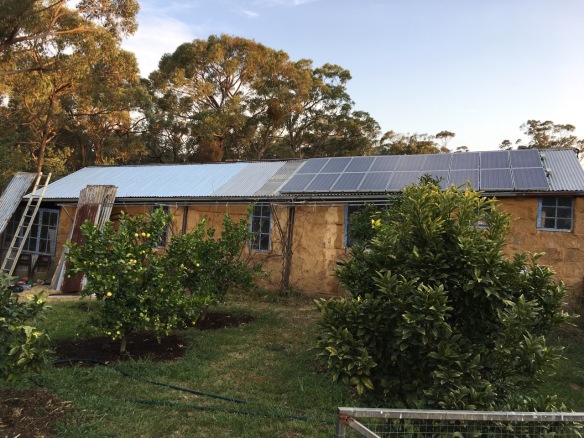