We say a temporary good-bye to Kyoto with its cherry blossoms all finishing up. Mostly on the ground. Its raked gravel gardens and Maiko make-over girls. We’ll be back, we always seem t find an excuse to return here.

We take the long train ride south to Kyushu. We leave Kyoto, and after a while the concrete high-rise scenery starts to diminish slightly and is replaced with low-rise. After a very long while we realise that the buildings are far less common and there is farm land starting to appear. It’s not that there isn’t any farmland near the bigger cities. There is a small, very small, plot of rice being farmed only 1 kilometre from Kyoto’s main central station. Amazing!

As we rumble on, we pass through farming districts and extensive fields of golden crops already for harvest with their heads golden of bearded barley ripening in the sun. I can’t imagine that harvest time for these crops is very far off. 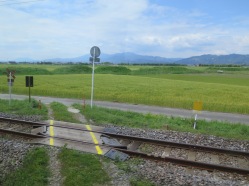 We also see farmers out in the flooded fields with their mini tractors and rotary hoes, working up the inundated mud, presumably preparing the silt for the coming planting of the rice crop. Ploughing now, if you can call this ploughing, is to kill off the weeds and any competition for the young rice seedlings that will be planted soon.

A field of purple vetch. A nitrogen fixing plant used as green manure to organically enrich the soil.

A small vegetable garden in the middle of some rice fields

When I was last here 6 months ago, they were smack in the middle of rice harvest in the autumn. We arrive in the far south in Kyushu, not too far from Kumamoto, about an hour away. Everything here is OK, different strata or geological sequence? We only had a level 2 shake up here. So the kilns are still standing and all the pots are still on their shelves.

It’s all foggy, rainy and damp when we arrive and the hills are coated in a beautiful mist. 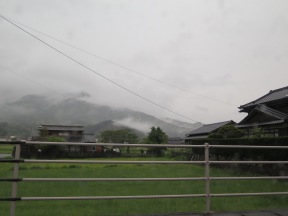 Our first visit here is to a place near Karatsu on the North West coast. We visit an old pottery studio that has existed in this little secluded valley for a couple of hundred years. The old lady tells us that her family have always been potters here since the arrival of the Korean potters 400 years ago. The war Lord Toyotomi Hideyoshi launched 2 failed invasions of Korea in 1592 and 98. Each time he captured and brought back prisoners of war. Some of whom were potters. One in particular found and developed the first porcelain pottery in Japan in 1616. Exactly four hundred years ago this week.

She is a sweet old thing and at 83, has seen a bit of life. Her son is now the resident potter here. She tells us that there were once 300 houses in this valley, most of them making pottery and farming rice and vegetables. Now there are only 5 houses here and only one potter.

They are in the middle of packing the kiln when we arrive. It’s a well-loved old nobori-gama wood fired, 3 chambered climbing kiln. 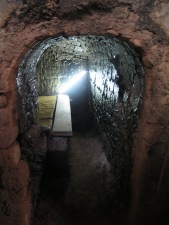 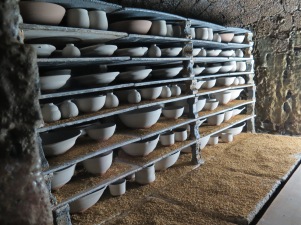 They pack the pots on rice husks to stop them sticking to the kiln shelf during firing, as rice husk is composed mostly of silica, which is refractory. It also creates a shiny ‘flash’ of colour on the exposed clay at the foot of the pots. 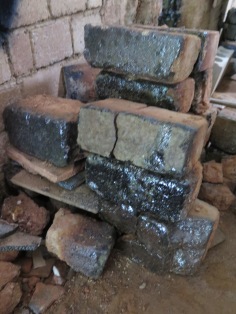 Later, we travel home to Arita via the ‘Hitakata’ ancient kiln site. This little valley once had a number of korean potter families working and farming here. But they are all gone now and only the archaeology remains. This site has been fenced off now to stop looters from stripping the site of old artefacts. 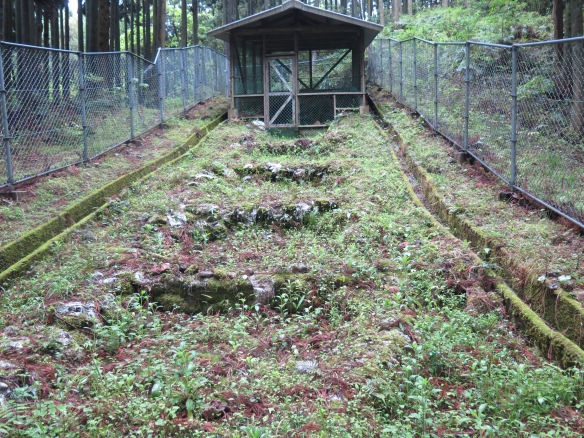 It was one of the first Korean kilns built here way back in the late 1500’s. It is set in a beautiful forested glade with a small but fast flowing stream nearby. Quite idyllic! This kiln was built without the use of fire bricks. It was constructed out of rammed earth. The local soil here doesn’t look particularly refractory, so it probably had a short life and needed to be rebuilt often.

I can’t read the Japanese on the information board, but the illustration shows 9 steps or doorways into the tunnel-like chamber. My teacher back in 1973, the Japanese potter Shiga shigeo, to whom I was apprenticed,  trained near Kyoto after the war and his teacher,  Saburo Saito had a 3 chambered climbing kiln, all made from rammed local refractory clay and home-made bricks. I was told that the fire-box needed rebuilding after every firing and the first chamber arch was likewise re-built after every 2nd or 3rd firing. This was the traditional way back them and is still used by some potters even today, if they are keen on reproducing the old effects.

Janine and I made all of our own fire bricks to build our wood fired kiln. The current kiln has had twenty firings and is still going strong. However the time will come when it needs to be pulled down and rebuilt.

Such is the way of the world.

Nothing is ever finished, nothing is perfect, and nothing lasts!

Fond regards from Steve and Janine in the shaky isle of Kyushu.