Skip to primary content
It’s dark and quiet. I’m here alone in the very late night, or very early morning. I’m in the kiln shed firing our wood fired kiln. It’s not 5 am yet and I’ve started our 8th wood firing for this year. We can’t start our firings too soon in the year, as there is a fire ban in place until the end of March or sometimes April, depending on the year and the state of the forest and the immediate past rainfall. I have fired our kilns during the summer in years gone by. But only after a good fall of rain, when the fire danger is reduced to low/medium risk. When the bushland all around is wet, there is no chance of my kiln starting a fire. If I want to fire over the summer period. I pack the kiln and seal it up, then wait for rain. It can take a month or more, but I can’t take any risks when there is a fire danger.

We are firing the mid-sized kiln of 1.25 cu. m. We don’t fire the big kiln anymore. At 4.6 cu. m. it is just too big for us now and the amount of pottery sales that we can make these days. We have found that it is better for us to fire the this kiln more often and get all our tests through in reasonable time so that I can continue my research into my local raw materials, especially the development of my single stone porcelain bodies and glazes. Now that we have a reliable small wood kiln that can fire our tests in at any time, it just takes 3 hours, this will make our testing and research regime a lot easier.  As the night marches on relentlessly into the early dawn, the birds start carolling, mostly magpies by the sound of it. They just love the dawn and make a big fuss about it. Dawn seems to be some time after 5 am when it is still quite dark, and before 6 am, when I can switch off the light and make entries into the kiln log without needing the light on. The birds are carolling madly now as it gets lighter in the eastern sky. It’s a tremendously beautiful sound, so gentle and lulling. It’s like some pure form of happiness made audible. It’s infectious. I feel happy! Why are they so infectiously happy? Are they celebrating the fact that they are still alive and not eaten during the night by some predator? 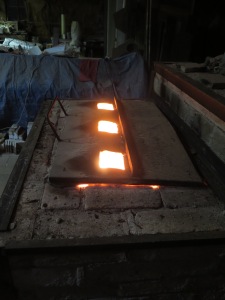 In this unique firing, I’m burning a type of timber that I don’t know anything about. I’ve been given a dead tree by the local tree-lopper guy. I don’t know what sort of tree it is, as it has no leaves or bark, but I know that it is not something that I have come across before. This is nothing unusual, because there are thousands of different tree species and as a rule, I only burn the local trees from around here. Mostly trees that Janine and I have grown here on our 7 acres of highland sclerophyll forest over the years. However, because I’ve lived in this little hamlet here for over 40 years. I have met a lot of people and they know that I have a wood fired kiln, so every now and then someone turns up with an offer of free wood for the kiln, just to get rid of it and not have to pay the dumping fee at the local council recycling centre, which is also located at the other end of the shire and 45 minutes drive away and is quite a drive. We are located at the opposite end of the shire from the recycling centre.
What I do know about this dead tree is that it is interesting. It is quite light in weight like a soft wood such as pine, but it has a strange twisted, interlocking grain like a hard wood such as a eucalypt. It turns out to be quite hard to split, even using the hydraulic splitter. It’s quite a tough wood. I’m hoping that it will burn well. But this is not knowable in advance until I actually get it into the fire box and see what happens over time. I have a lot of wood already cut, split and stacked ready for firing. I have several stacks, each about enough for a firing. I have stringybark, paperbark, ironbark and she oak all ready and prepared as well as a firings worth of radiata pine, from a load of trees brought here by a local contractor who was asked to clear a building block to make a house site. I naively said “yes. Bring the trees here, sure, I’ll take them”!
It turned out to be 8 truck loads in his 8 tonne truck. He had more, but I just ran out of space to dump it safely. He kindly sawed off the root ball, de-limbed them all and cut them to the 6 metre length of his tipper tray so that they would stack and carry efficiently. I have no way to know if each load was the full 8 tonnes or not, but it surely was a very large pile of logs by the time the last load was dumped here. It took up all of my wood storage space and then some. I could hardly move the ute and wood splitter around. I simply had to start at the far end and whittle away at the pile until I could make a space large enough to turn around in. Then I worked my way cutting and splitting all the way up one side to clear the driveway, back up to the road. I have been working my way through this huge 1/4 acre pile of trees for a while now and there is still a big pile of logs left to work through.

These logs are free fuel. Something not to be sneezed at in these days of increasing energy prices, but only free as long as you already have a spare 1/4 acre of forest clearing, a couple of chain saws, a tractor to drag the piles apart safely, a hydraulic wood splitter and a ute to transport the cut wood around, and then a wood shed to keep it all dry once it is cut and split to be stored and seasoned, then, ultimately I can burn it for “free”!
This firing has a lot of tests in it, as all my firings do. If I don’t have time to make some new tests and follow-up on new ideas. I feel like there is something wrong, something missing. After a lifetime of potting. It’s 48 years now since I got to throw my first pot on the potters wheel and was hooked. Any firing without tests in it is an empty firing. It’s the test pieces. The promise of something new revealed, that makes the unpacking extra special and not just plain mechanical work. It is the stimulus of expectation that makes the difference. I know that I should be aware of my all too human failing of expectation, just observe it and let it pass, but it just hangs around until I see those tests.  As it often turns out, they are not very special, but every once in a while there is something interesting that makes it all so much more rewarding and worth while. It’s probably something like a kind of addiction. Hanging out for that next hit of pleasure, that next intellectual/aesthetic indulgence. It can just be a test ring or a shard. The object itself isn’t all that important, it’s the internal machinations and the thought processes that it provokes.
I have 10 new body pastes in this firing, but so as to keep it all under control. I am using all my reliable and well-tested rock glazes on them. Glazes that have proved to be suitably stable and beautiful. I can’t afford to use unknown bodies with unknown glazes on them. That would be asking for trouble. I have set up a system where I am testing each of the 10 new porcelain body recipes with each of my 10 rock glazes. Each new clay recipe/variation glazed with 10 well-known glazes. A hundred bowls in all. This should reveal something. I don’t know quite what yet, but I’m keen to find out. Even if there is nothing special or ’showable’ it’ll still be something to cross off as not worthwhile, so then I can work on something completely different. I suspect though, that there will be something in there. I just don’t know which one. This firing hopefully will reveal the best, or most likely contender for further refinement.
I’d like eventually, to be able to make something that is both meaningful and beautiful — on a shoestring
All will be revealed in a few days.
This is the life of a frugal self-reliant potter. Nothing is ever finished, nothing is perfect, nothing lasts.
Its just like a good salad!