Skip to primary content
We live out our quiet days here in the Southern Highlands. On most days, nothing much happens. I turn the stiffening porcelain slip on the drying area. We throw or turn pots. We mow, weed and water the gardens and orchards. We harvest, preserve and cook our vegetables. We make clay and glazes from the rocks, ashes and shales that I collect out and about in the local environment. Some of it is 100% sourced off our own special little piece of land, right here.
We like to support local endeavours and a while ago we were invited to visit the local sheeps milk dairy. The pecora dairy has about 120 milking sheep of the East Friesian breed variety. The dairy isn’t open to visitors, but our son buys their sheeps milk, pecorino cheese for the Biota restaurant where he works.
The dairy makes a range of pecorino cheeses from their sheeps milk. We have bought 3 of them over the years that they have operated here. Apparently there are only two flocks of milking sheep in Australia. This one here locally and another one in a different state. 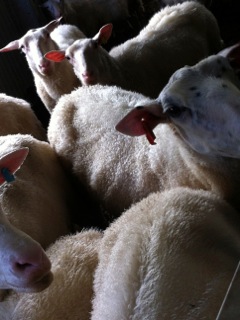 We arrive with our son just before milking time and all the sheep have made their way down from the hills and far pastures to the dairy, ready for the milking. It takes about an hour to milk  the 120 odd sheep in groups of about 10 in the milking stalls. The sheep come in for the milking twice a day, morning and night. Each one gets closely examined and scrutinised while in the care of the milk maid. She examines them closely and makes remarks on the progress of a pregnancy or anything else unusual that might appear.

The sheep get a feed of a high protein supplement while they are being milked. There is an ingenious contraption that feeds them while they are being milked. They are very keen to get their noses into the trough as soon as the gates open and allow them in for the milking. The contraption allocates a place at the feeding trough and a pair of suction milking cups to each animal individually. As they take their place at the trough, they push a bar that opens the gate for the next sheep to enter, and so in turn the whole row is neatly filled. The complete arrangement is raised up, so that the milkers don’t have to bend. Once milked and fed, the whole calliope folds in on itself and rises up to allow the sheep to walk through and out of the building, allowing the next batch of 10 sheep to enter. They anticipate the workings of the milking sequence and cue up and wait on the race. Waiting their turn.

It’s a beautiful thing to see and experience. These organic, wholesome people love their sheep and care for them lovingly. They take a lot of time over their charges and treat them with care and affection.
We are very privileged to be allowed to tag along with our son on this special occasion and we are grateful.
We come home to a light supper of, you guessed it,  some local pecorino cheeses, a few of our hazel nuts and some fresh garden veggies.

The Lovely asks if we should think about making cheese again.
I say No Whey!