I have been using the warm weather. In-between rain storms. To dry out some of my new batches of single-stone porcelain clay test batches. The 50 litre batch of 12 month aged porcelain slip is now almost stiff enough. It should have been ready to lift off the drying bed a couple of days ago, but with this last series of rain storms, the atmosphere has been very humid lately, so we have slow drying weather. The mornings start with a heavy mist that doesn’t burn off until later in the morning when the sun get up.

I have used the plaster tubs to dry out some small batches and I now have 7 different new clays to test and throw. They are all just about the same on the wheel, not a great deal of difference. I have dug out a bag of special ‘vintage’ porcelain from my clay store. I don’t have a date on the bag, but reference to my clay-making diary tells me that it was made in 199o! This is the oldest clay in my cellar at 26 years of age. It has stiffened a bit too much to be throwable now, so I have to dampen it down a little. I’m amazed how well it throws. The reason that I put it away in the first place was because it was so short that it was unusable. Now after 25 years of ageing, it throws like a normal porcelain. It does have a slightly peculiar ‘grainy’ texture though. A little bit odd for such a finely milled clay. Some sort of bio-chemical change has taken place in the intervening years of ageing.

I remember co-responding with Harry Davis back in the 80’s. He asked me if I had any experience with clays that went grainy after long periods of ageing. He had left clay in his clay store while he went away for 10 years and worked up in Izcuchaka in the Peruvian Andes on his and May’s private aid project. When he returned, all his clay had changed texture and become grainy. I hadn’t experienced anything like it at that time. I wasn’t old enough to have clay laid down for ten years at that time! Now I am, and I suspect that it is some sort of aggregation of the microscopic clay particles into larger flocs over extremely long periods of time. This happens in slip if left in a slightly acid condition. So, perhaps it’s possible in the plastic state as well?

Of these 7 different bodies, there are 7 different colours, from iron stained yellow, through to almost white. Of the bodies that I have made from my ‘bai tunze’ single-stone porcelain stone. There are variations in colour due to the fact that there are veins of iron running through the rock. I crush the stones through the large, primary jaw crusher  and then spend some time sorting and separating the iron-stained pieces from the white material, these are them processed separately to give yellow, cream and grey clay body mixes.

The iron stained bodies respond well to the wood firing by flashing to a mahogany red colour, where the paler coloured mixes flash in the wood kiln to a pale pink to crimson colour. All the milled stone body mixes grow a series of organic algae and/or fungus come moulds of some sort or another. The clear plastic bags that I store them in turn green and/or buff/brown where daylight can get to them. A little bit off-putting, but it seems to increase workability/plasticity rather than decrease it over longer periods of time. I’m not saying that the presence of algal growth increases plasticity, but the time spent ageing the clay increases the plasticity and the algal growth is a natural sign of this extended time taken.

Because I don’t add anything to my milled local porcelain stone bodies, except a small amount of bentonite and the slightly acidic tanninised tank water. The whole thing is alive with all sorts of organic material from both the natural stone and the water. It’s a living thing! It doesn’t happen straight away, but over time stuff grows in there where-ever the conditions are right.

Commercial clay doesn’t do this. I recently opened a bag of commercially prepared paper clay to find that it smelled of ‘dettol’ antiseptic fluid. Nothing is going to grow in that! I’m an organic gardener and I am trying to live a simple, creative, organic life. If green algal mould is the result in the bags of clay, so be it. At least I know that it is alive, and not dead and even possibly toxic.

One of the batches of my ball milled baitunze, batch JV15db, was milled for a little longer than usual to get it extra fine. However, I seem to have milled it a bit too long this time, 16 hrs. I suspect that this was too long, because when I threw my first bowl out of it, it shrank and cracked in the base where it was thickest. This has happened once before. I will have to blend it with a coarse milled batch now to reduce the shrinkage a little. 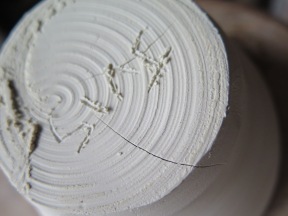 For dinner we try yet another variation of ratatouille with todays pick of  French beans, we par-boil them, so that they are still crisp and then add them into the mix of ingredients from the garden. I partially BarBQ the egg plants and zucchinis while grilling some long yellow capsicums. Janine reduces a boiler full of very ripe tomatoes, onion, garlic, olive oil and basil. We finish it off in the flat flan-pan, then pop it under the grill and melt some grated cheese topping to a golden yellow/brown crispy finish.
This is what we have, so this is what we eat.

Best wishes from the algal greenie and his all greenie galSteve