I came to Japan with a few projects in mind and as my stay here develops some of my plans have fallen into place, while it has become apparent that others will not be achievable on this trip. But there will always be the possibility of another time?

One of the little side projects that I had in mind was to buy some ‘kanna’. Kanna is the Japanese word for sharp edged tool, so it can be applied to razors, knives, wood working planes as well as potters turning tools. In particular, I’m here to find the source of the very special and quite rare, tungsten carbide tipped turning tools that the porcelain potters here use.

I have tracked down and visited 4 potters supply shops now, I find something of interest in each one. Today I followed a lead up into the hills to find a small workshop where I’m told that there is a man who actually makes the tools from scratch. I’ve been lucky enough to meet someone, who knows someone who can take me there

My guides took me to visit this special tool maker in his workshop right up in the hills, into the next provence. In a small shed in the bush, down a little lane, in a gully, under the huge concrete pylons of the freeway, that passes straight over the valley. Finally I have found the unremarkable workshop of the humble tungsten carbide turning tool maker. It’s a small unprepossessing shed. You wouldn’t look at it twice, and it’s ever so small to boot. No signage, no identification. You just have to know! 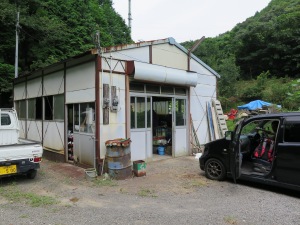 We go in and straight away I can see that this is a real metal workers workshop. It has the taste and flavour of metal all about it. The types of machines, the black metal dust on the floor. The smell of burnt resin binder on the carbide cutting disks. It all seems, looks and smells  so familiar. Parts of it could be my metal working shed. So I finally get to track the shy and elusive, wild Kanna to its source. So this is it’s natural and unspoilt habitat. Don’t know what I was expecting, but it wasn’t this. Something corporate, larger and more commercial/industrial. It all seems so humble and small scale and it is!

This is Japanese artisanal work. The sort of thing that is slowly dying out here. At least it has lasted this long. I am a very lucky man to get here now. In this place and this time. I am grateful. This lovely man is quietly spoken and very humble, as far as I can tell with no language to communicate with at a deep level. But you can sense a person’s character from their demeanour, even without words. I only have greetings and platitudes. I’m so glad that I have my friends and guides here to translate for me. Because I want to know more about the process and how he works.

Apparently this workshop is only open in the mornings. After that he has other things to do?? Maybe a second job? or out on the road selling his wares, because not too many people will find him here in the this unmarked shed on an unsign-posted lane, out of the way from a small town. Although people in the know do find him here. While we are there a young girl drove up with two tools she bought a while ago. She wants them re-sharpened.
I looked through his boxes of stock and find two tools that will be of use to me. it’s a bit difficult for me, because firstly, I’m left handed and secondly I work in the reverse rotation to the Japanese style. So not all tools will be suitable for me. I can commission some to be custom-made, but this won’t be necessary. I can find everything that I need in symmetrically shaped Kanna. I buy two of his tools from him. That just about completes my set.
Then to my surprise, I’m told that he also makes wooden tools as well. A real renaissance man! So I can’t resist buying a hand carved ‘nobebera’, or ‘nijiki’ throwing profile from him as well. He has boxes of these in stock too. Different shapes for different pots. Funnily enough I want one for throwing small bowls! I don’t know which one to choose from his stock, as I am so inexperienced and naive the these matters, so I buy the one recommended by my friend. I get a quick lesson along the way about what to look for in an ideal nobebera.
I had no idea that this guy we were going visit was a complete all-rounder.  He also makes these special wooden throwing tools himself. It’s a very long process, 12 months in the making. Sometimes longer, it all depends on the cross-section of the wood, that has to be seasoned properly. Some of the thicker sections need  to be seasoned for up to three years in water, before starting the process. He uses ancient, thick cross-section, Azalea wood, called ‘nijiki’ here. 125mm in dia. that is up to 50 years old. He roughs out the shape and then soaks the wooden proto-form in water for several months, then slowly dries it for another few more, before shaping it to almost-right. It has to be cut from the branch in such a way that the eye of the grain is centrally located in the tip of the curve. He then lets it warp as it dries completely. As it finishes its drying and settles into shape it needs a bit more re-shaping. Finally, a few months later, when it has stabilised, comes his final shaping and it’s now ready to sell. 12 to 24 months to the day after it was cut.

My friend is at pains to point out that this is only the beginning of my mutual contract with the maker and this tool. It will warp to suit my methods and the humidity in Australia, when I get it home, so don’t expect that this is it. You have to use it and then re-shape it a little yourself, to get it just right for your purpose. It will probably need a little thinning out as well when you get tit home, to get it just thin enough to be flexible, but not so thin that it breaks under pressure. It is starting to sound like the making of a good cello, all the intricacies of the living wood and how it is never really stable, constantly responding to its circumstances and environment.
I buy the one that my friend has selected for me out of a box of about 50. He knows what to look for, He has some of these tools that are 40 years old in use in his studio.
Its a beautiful thing. I am proud to own it, and consider myself especially fortunate, to have met the maker in his native environment and seen where it is made. In-situ as it were.  It is such a privilege!

Best wishes from Steve at home in the natural habitat of the hand made Kanna and nobebera.