Before we leave Stoke-on-Trent, we have to go to a local English restaurant and try the local fare. I have been told – and I don’t know if this is an urban myth or not – but the most popular dish in Britain is Chicken Tikka Marsala with mushy peas!

I haven’t even seen it on any menu, but I live in hope. We do try the local Indian and have a very nice meal. Shame about the mushy peas though! 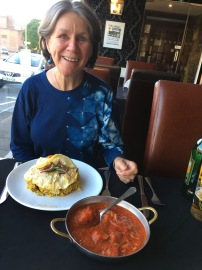 From Stoke we make the drive across country to Wales, which isn’t very far, half an hour and we are over the border. I read somewhere that there is no place in the UK that is more than 75 miles from the sea. That doesn’t seem very far, about 120 km. That is about as far as we live inland from the south coast beaches. We’ve been known to go to the beach for the day with Geordie when he was young. The difference is that we don’t have British traffic and narrow lanes.

The drive is uneventful and we are soon with our friends Annie and David. Annie is the daughter of Sally and John Seymour. The seymours were at the forefront of the post war self sufficiency movement in Britain. We met Sally Seymour when she called in to see us at our home here in the late seventies. She had our names from a common friend who she had known in the UK.

We didn’t know who she was, but welcomed her into our house as a guest. Only in conversation over the next day or so did it become apparent to us who she was and that we already owned a couple of her books, as we have always had an interest in Self-reliance. That is why we moved here, way out in the sticks, where we could afford a derelict ruin with acres to make our projected lifes ideals come to fruition.

Sally came and visited us a few times over the next decade and even stayed and worked in the pottery with Janine for a few months while I was away studying in Japan in the 80’s. Apart from all the hard physical work of pioneering self-sufficiency in Britain with her husband John Seymour, she also raised 4 children. Their life is a very inspiring story and can be read in a series of books, 3 of which we own. 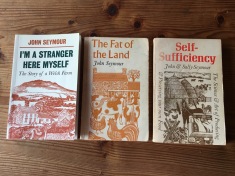 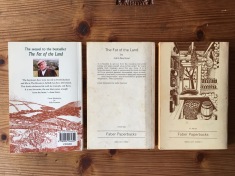 Sally is also an accomplished potter. She learnt from her mother who was largely self-taught, as I understand it. Sally did al the illustrations for their books.

There is a new edition of ‘Fat of the Land’ 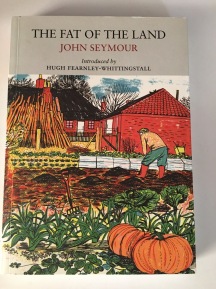 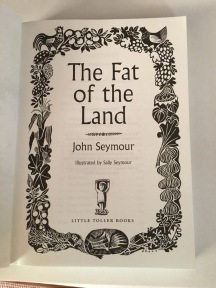 Sally had a stroke a few years ago and now lives with her Daughter Annie and Annie’s  husband David on part of the original farm that Sally and John bought back in the 60’s.

Annie and David are continuing on with the family tradition of self-sufficiency. Annie makes pots and David makes furniture. Together they work a few acres with extensive vegetable gardens and fruit trees. 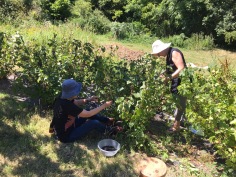 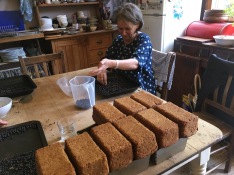 We help Annie pick black currents. A very labour intensive job, as they are very tiny and are suck to the bush very tight. Each tiny little individual berry has to be individually pinched and picked off the cane. after picking, the currents are spread out in trays on the kitchen table and carefully sorted to remove any extraneous material that might have found its way into the bowls. Some of the currents are washed and frozen, others boiled for deserts and puddings and some are dried for storage.

We work in the sunshine in the garden while David goes about making the days batch of  a dozen sourdough loaves. The drought is all mixed by hand in small batches. The drought is left to ‘prove’ and rise in plastic bags to keep it humid and draught free, and from developing a hard, dry top which will prevent it from rising well.

David’s small organic bread-making business is just one of many small income streams that they survive on. All the bread is sold locally to people within just a few miles of their home. Mostly people come and collect directly, but David does make a few deliveries to a some customers a bit farther away, when he goes out to do other jobs. 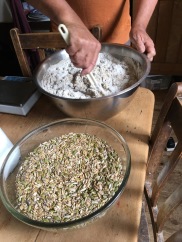 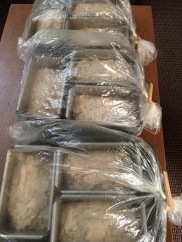 It’s a pleasure and an honour to be able to take part – in just a very brief way – in this wholesome and creative life experiment. it’s also great to be able to catch up with old friends like this, spending time doing the most menial of jobs while catching up on news and gossip.

We  have a day ‘out’ to visit a local archaeological site. An archaeologist has been working around here for the past 30 years, every summer, he brings his students from the University to do a dig locally. He has been looking for the site(s) where the Stone Henge capping stones came from 5,000 years ago. It is well-known that the capping lintels came from Wales and more specifically from the Preseli mountains around here near the Carningli peak.

This year he has finally found the exact site. They have unearthed a finished lintel stone ready for transport. It is all set up on wedges ready to have the wooden rollers inserted underneath. It is sitting on a flat stone-flagged path which leads directly down to the river at the bottom of the slope. Apparently, mineral analysis has proven that this is the exact same stone as is found on-site at Stone Henge. The rest of the excavation on site has been re-filled, but they left the stone uncovered.

To my mind, this answers two questions, where they came from and how they were moved. It’s pretty obvious to me that if they built a flat, paved, stone path down to the river, then they were floated away on a raft from here. Presumably to be shifted to a larger boat down near the coast and then sailed around to Wiltshire. 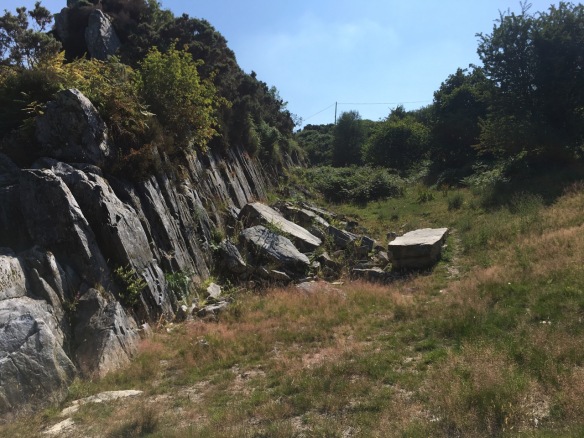 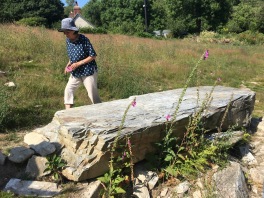 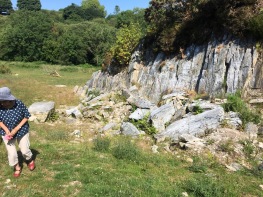 Later we visit the standing stone ‘Dolman’ burial chamber. This grade stone triptych and capping stone would have originally been buried under a hill of soil. 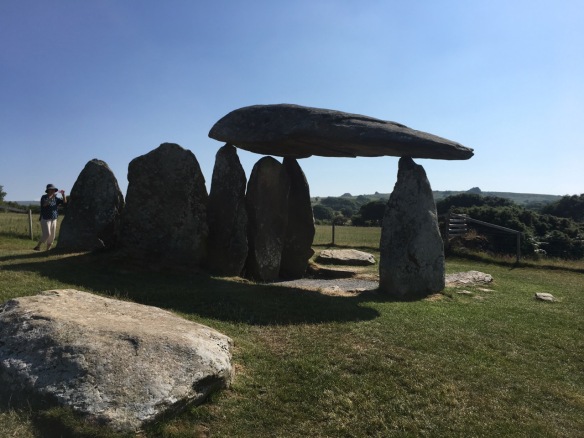 On the way home we call in to visit the local Community Hall, where archaeologists have excavated one of the oldest and best preserved roman era pottery kilns in Wales. it was covered by the stage in the hall for many years, now it’s all cleaned up and preserved behind glass. Back in the day, it seems that it was just too much work to pull it down, so they built the stage over it.