Mr  Kanaiwa tells me story about the Lost Kaolin mine of the ancient Nabashima Clan. The Nabashima clan were very well known for the excellence of their white porcelain with overglaze enamel decoration. The tough men of the clan marched into Arita one day, 350 years ago and stole the kidnapped Korean potters away from Arita and took them to the hidden valley of Okawachiyama, where they put them to work making the most excellent shirajiki – super fine white porcelain, that was destined for the exclusive use of the leaders of the clan and their cronies. This porcelain had to be the whitest and finest of any that it was possible to make under the threat of death. These twice kidnapped Korean potters did just that and to achieve it they had to find some very white materials to do the job.

So, the legend has it according to Kanaiwa san, that they found a source of ultra pure, white porcelain stone and kaolin somewhere to the south East of Arita village up in a tributary valley. As I understand it, and I could have this wrong, but what I thought that I was told, was that this lost mine was located at a place called Iwatanikawachi.

Kanaiwa san has spent a lot of his life researching the special milky white glaze quality of the early Nabishima wares and has analysed samples of the ware. He shows me the analysis sheets and the Seger formulas that he has derived from them. It’s a wonderfull and extensive piece of research. I’m Impressed. It’s the sort of thing that I would have done if I were here doing his job. I can read the formula and know the general glaze that he is describing. It’s not anything special, with no surprise ingredients. I know it well. As with so many things in life and particularly in ceramics. It’s not the secret formula that is important, but the materials that are used and how it is all fired that creates the special quality.

Kanaiwa san suggests that we go for an expedition into the Iwatanikawachi valley and look for the stuff of legends. I agree enthusiastically. So we set off and park the car at the foot of the valley where we make a ‘habakari’ stop. Tsuru san who is my translator on this venture, reads out from a memorial plaque set in a stone in the pack. She exclaims with excitement that this is the very site of an early kiln. One of the first in the valley 400 years ago. This kiln made imitation Ming Dynasty wares for export to Europe. When the civil war in China closed off the export trade in porcelain to the Dutch Traders, they came to Arita to see if they could make similar porcelain wares for their export trade. The potters here were given sample of the Ming porcelain to copy, and they did that exactly. Even to the extant of writing “Made in China in the Ming Dynasty” on the bottom of the pots in ‘gosu’ cobalt blue pigment. Some of these ‘fake’ Ming wares are on show here in the local museum. Tsuru san is very excited to see this sign and reads it out to me. She knows the story well and has seen the wares, as she works in the museum part time. So this is the very spot where the archeologists discovered the shards!

Everywhere around here reeks of history and can surprise even the locals it seems. 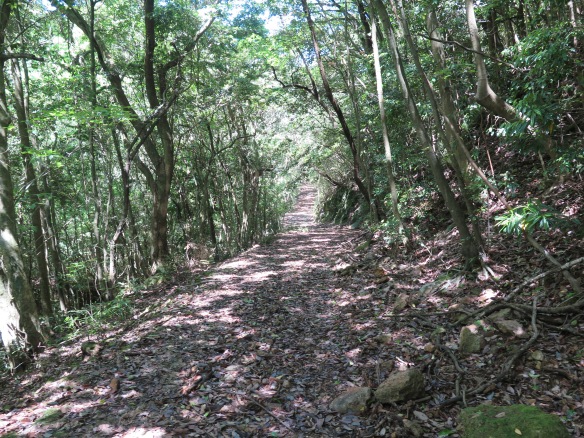 We set off on our walk up the valley. As we go Tsuru san translates for me the story that Kanaiwa san is telling me in his local Arita dialect. This walking track was once upon a time the main road from Sasebo to Hasani and would have been the very road that Ri SamPei would have walked along to get to Arita where he discovers the special porcelain stone that has made this place rich over the 400 years since. We walk. He talks. Tsuru san translates. I listen. It’s a nice warm day and the sun is out, but we are walking all the way in the shade of the dense forest canopy. There are beautiful samples of porcelain stone all along the track, but none of it is ultra white and pure. There must be, or have been, a particularly pure vein of pegmatite somewhere along here that could produce such a stunningly white and clear product. I can’t see any sign of it. I’m supposing that others must have looked. If Kanaiwa san has found old documents that indicate that this is the place, then others must know this too and have been along here with the same intension.

I don’t find the pegmatite dyke, but I do stop and admire the exquisite beauty of the small gurgling stream as it passes over some small falls. The word shibui comes to mind.

Eventually, we arrive at the top of the mountain, to find a reservoir under repair and maintenance. There have been heavy trucks and earthmoving equipment coming and going in the last few days from the other direction. I ask where they come from. Kanaiwa san tells me that this is the end of the Utan street. I’m amazed. We have almost half circumnavigated the Arita valley from South to North on the East side. Utan street is where Tatsuya San’s workshop is located and where I worked briefly last year. 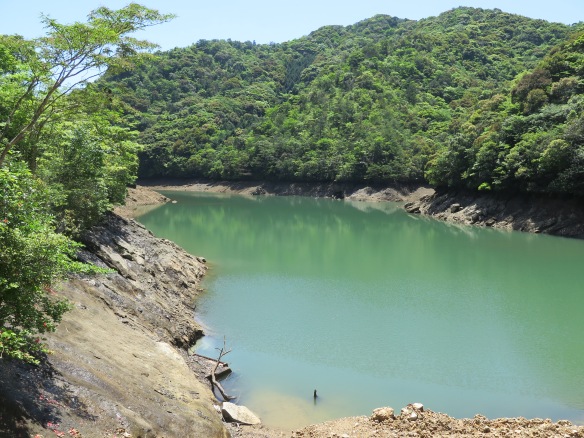 We set off back along the old Edo period road. Its been a beautiful, if largely uneventful day. We discuss where the deposit might have been, as we haven’t seen any sign of extensive excavations anywhere along our path. We come to the conclusion that any workings that might still remain, must be well covered with the dense undergrowth of the valley and are most likely on the other side of the river to the path that we have taken. As it is late in the afternoon now, we decide that we will need to make another trip with more preparation to slash our way through some of the denser thickets on the other side.

Nothing is ever finished.