Every morning at dawn, the temple bell rings. It makes its first gong at 6.00am and then about every 35 seconds until ten past. The next strike comes just as the last one has died away. It is a very gentle way to be reminded that the day is about to begin.

Luckily for me, I live some distance from the temple. if I lived right next to the giant bell, I might have a very different opinion. I lay in bed and ponder just where this temple is. There a so many temples and shrines around here. Everywhere in fact. The streets and lanes are crowded with them. I have some idea of the direction of the sound. But sounds are funny things, so influenced by the surrounding buildings and the hill, that I’m not too sure if i’m hearing the sound directly or as it bounces off another building.

Today, I wake just as the dawn in breaking and the new pale light illuminates the shoji screens of my room. It’s 5.30 am. A while before the bell is due to ring this morning. I decide to go out into the street and listen more closely to determine where the sound is coming from. 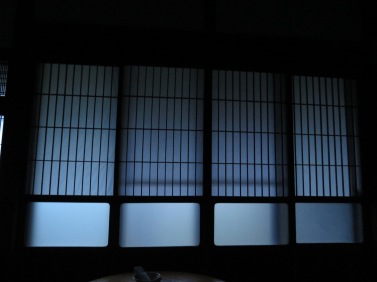 I’m up, washed and dressed. If I move fast, I will be able to find to source of the bell. It’s not that important, but I’m inquisitive. My instinct is that it will be coming from the higher temple, above the train line, up on the hill. but my ears have been telling me each morning that it is emanating from the opposite direction. I’m never really sure when I hear the first gong, but once I’m awake they enter my consciousness and become real.

I start by heading to where I feel that it has been coming from in the past. I have 15 minutes to find it before the monk starts his morning task. I walk down the street, I pass a gap between two buildings, there is a little lane way. I can see straight away that it leads up to some temple buildings. I walk up the lane as quietly as possible. I don’t want to disturb the Monk in his daily rituals, he might be meditating?

When I get up there, there is no-one to be seen. The temple is beautifully kept. It has a raked gravel garden with some large stones. I still have several minutes before the first sound is due to ring. I take a moment to look around the garden and courtyard where the bell house is situated. We are quite well elevated here, above the buildings in the street. The sound would carry well from here. It’s not as hight as the other temple up on the hill, but high enough.

Only a minute to go and there is no sign of anyone around. Suddenly the sound of a bell sounds out. It isn’t this bell at all. I was completely fooled. I could have sworn that the sounds were coming from the direction of this temple. I head off down the lane and out into the street. It must be the hight temple then.

I head off in that direction, up the street, then up the side street towards the temple. Just then it strikes again. I’m completely wrong! What’s happening?  The sound is coming

from the other end of the street now, back where I just came from. I turn and hurry back with as much dignity as I can muster, as I rush down the street, back past my place and further down the hill towards the sound. I want to get there before the monk or priest finishes his work. I only have 10 minutes max. to find it. Of course, I could always try again tomorrow morning, but I’m up now and on the job.

The sound is definitely coming from here. I walk up the lane and there it is, right in front of me. As I approach, the bell strikes again. Actually, that is wrong. The bell sounds as the log that is suspended on 4 chains swings back and strikes the bell, producing that marvellous resounding gong sound. I can’t see the monk in  underneath the supporting structure, so I walk around the garden wall to

where I can see the bell house most clearly. There is no-one there!  As I watch, the log swings back and strikes the bell again. It is an automated system, run mechanically. I have to say that I’m just a bit shocked and disappointed, for some reason, I was sure that there would be a person here doing some sort of ritual daily devotion.

So now I know, or at least I think that I do, but what do we ever really know? There are two temples and two bells. The first strike seems to come from up on high, then all the subsequent rings are from the lower one.

I’m sufficiently satisfied with this explanation to go home and prepare my breakfast of unsweetened natural yoghurt and fruit. The day has begun. No time to dally. There are porcelain bowls to be turned using my new hi-tech, tungsten carbide tipped kanna turning tools. If I have no problem adopting this brand-new technology for my work to make my life easier, then why shouldn’t a monk do the same?