The weather has turned somewhat balmy after the snow. Maybe spring is on the horizon? Many trees are now in bud and the earliest peaches, plums and almonds are in flower. 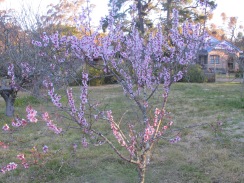 I get up very early to start the firing in the wood fired kiln. It’s 4am. It’s bitterly cold and there is a crunchy frost that I can’t see in the pitch darkness of the very late night/early morn, but I can hear and feel it ‘crunch’ underfoot as I walk down to the pottery.

The firing goes well enough. Pretty well straight down the line as expected. It ought to, as this is the 23rd firing of this version of this iteration of this kiln. Before I could pack the kiln, I had to crawl inside the fire-box to chip out the build up of ash glaze slag. This is fairly normal, but this time I also had to chip out the stump of a snapped off hob brick, that broke off during the last firing and dropped into the firebox. A tricky job as the space is pretty limited, there isn’t much room to swing a hammer in there. In the past I have drilled several holes into the brick and then broken it into smaller pieces that I can chip out. It happens every few years.

This time I try something different. I decide to drill a hole from the outside of the kiln, into the spot where the back of the broken stub of firebrick ought to be. I line it up pretty closely and then using a metal rod, I hammer the old firebrick remnant out of it’s hole, where it has been sitting glazed in tight with all the wood ash for some time. It obliges me and slowly lets go and comes out of its socket fairly easily in only two pieces and a lot of small rubble and spalls.

Maintenance seems to take up and extraordinary amount of my time at this end of my life. This job has gone well, but others are waiting and ongoing. The kind of wood firing that I have developed is quite sedate and well paced with plenty of time to do small jobs, clean up and put away all the tools used in the packing. I sometimes do small maintenance jobs, but they have to be very simple. I can’t afford to get too involved in anything other than the process of firing. I certainly have time to sit and think, plan and ponder. It’s so luxurious to have time to just sit and think. I can afford this luxury, precisely because I have made sure that I have all the necessary wood fuel, and more, cut, split and stacked inside the kiln shed before I start the fire. I make a mental list of all the repair jobs that are waiting to be attended to. I need to replace the last piece of plastic crap that has recently snapped off the pottery roof.

This second piece of plastic crap storm water gutter head has also disintegrated and fallen from the pottery roof, just a couple of months after the first one.

(see; “Note to self: Don’t buy plastic crap” Posted on 04/05/2015 ) I swore that I wouldn’t buy another modern plastic one, and I won’t. So I take an hour off and make a new one out of stainless steel off-cuts from the kiln factory. As it’s my second one in two months, I can still remember how I made the first one and this one goes very quickly, as I avoid all the mistakes that I made inventing and making the first one. The upper face has to be raked back at an angle of 45 degrees, so that it can be fitted with some stainless steel mesh that acts as a leaf deflector. 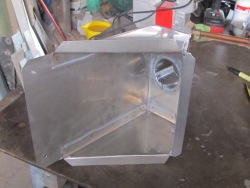 The list of jobs is endless. Now, the guttering on the wood shed has rusted through with all the leaf litter that blows onto that roof from the tree cover. I make a new gutter and fit it up. I’m proud to say that I don’t buy prefabbed stop-ends and down-spouts. I was shown how to make them by one of my mentors. Joe Enfield, the local village plumber 40 years ago. I worked for him as his labourer/assistant for a couple of years when I first came here and didn’t have a proper house and certainly no pottery workshop or kiln. It took me a couple of years to get established again here after we were burnt out in a bush fire in Dural, where we had been renting a place.

I learnt a lot working for Joe. I was only employed on a casual basis on bigger jobs, or where there was crawling under-floor work or a lot of ladder work, as Joe was in his 60’s and close to retirement. He wasn’t obliged to teach me anything, That wasn’t the deal,  but we got on well together and he invested a lot of time in me because he could see that I was keen to learn. I don’t make very good sheet metal work, roof flashing or plumbing, but what I do works and doesn’t leak. I work in the old fashioned way that I was taught by Joe. One of the last of the ‘Old School’ plumbers who still knew do all the old hand skills.

I’m often in at the plumbers wholesale suppliers. They know that I’m not a plumber. I ask all the dumb questions about taps and toilets etc. I only have an account there because I buy a lot of gas fittings for my kiln work. So when I get a length of guttering, but decline the stop ends and down spouts, that are usually sold with it, they question me about it. All the plumbers buy the prefabbed parts, why don’t I. I’m proud to say that I can make my own from off cuts, scrap and leftover bits. Just the way that I was taught. Sometimes I end up making the parts out of stainless steel – because I can! I have more stainless steel off-cuts than galvanised metal to work with. 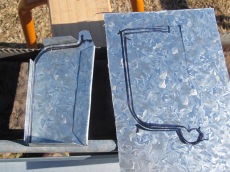 The firing proceeds slow and steady all the way up to top temperature. It turns out to be a glorious warm day with no wind. This firing, I go to 1320oC. Cone 11 down in the hot spot. 16 hours to top temp and then a 2 hour controlled burning down, until it is safe to leave it to cool naturally. I have my friend, Jim Black here throughout this firing. He helps me pack the kiln by rolling out all the little balls of wadding. During the firing, we sit and chat and solve all the worlds problems while we watch the kiln fire itself. Getting up every so often to stoke more logs into the firebox as necessary. We’re quite ready for bed when it’s all clammed up at 10pm. 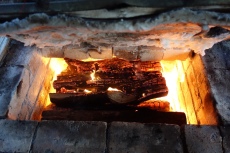 The next couple of days, while the kiln is cooling, I have my other friend Warren here to help with the winter pruning. We get stuck in and prune all the almonds, blue berries and grape vines, trim the hedge and then weed and mow all the almonds, vegetable garden and citrus grove. it’s a long day, but well worth it when we look back after it’s finished. Everything in there is in good shape for spring now.

The next day we take down some ageing wattle trees that are over hanging the fuel shed. Its a slow process, because there are three big terracotta pots under these trees. One of them is from the Parliament House Project, from back in 1988. To drop these trees safely, I need to eliminate the weight of the upper branches, in the right places, bit by bit, by taking off one branch at a time, until each tree is whittled down to a trunk that can be chained to the truck and winched over in the right direction, so that it falls safely into a vacant space in the garden. The trunk and larger branches are then cut up into small kitchen-stove sized lengths and wheelbarrowed over to the wood shed to season for a year. The three trees take us all day to deal with and then clean up all the mess.

While I’m in a gardening mood, I optimistically decide to plant out a few carrot and beetroot seeds. Maybe it’s a little bit early yet, but it somehow seems to be a little warmer and the days are certainly getting longer. The garden trowel has completely rushed away at the end, by being left stuck in the soil while not in use. It’s rusted away down to half its length. I should have looked after it better. It’s only lasted 18 years. I make a new blade for it out of galvanised steel sheet, weld it on and give it a few coats of zinc paint. lets hope i get another 18 years out of it. I suspect that the old hardwood handle won’t last that long? Self reliance is all about making do and doing with what I can make. 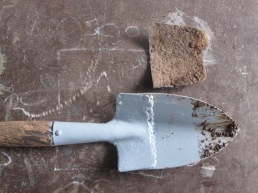 This is just one more of the many jobs that have been on my to-do list for some time now. I seem to cross one off and Janine adds two more. We can never get to the end of the list, but it’s fun trying and doing most things ourselves. It beats working for a living.

from the Artful Bodger