Now that my show at Watters Gallery is up and the opening is over, it is time to get stuck into rebuilding my kiln for the coming year of firings, starting next week.

We are into the cooler weather now (in theory) and the summer fire bans will soon be over. The fire box is the part of the kiln that takes the most wear and tear, the greatest heat, the most ash deposit and the greatest heat shock from cold air dunting. The fire bricks in the fire box take quite a beating, so there is always maintenance after every firing, but then a big job once a year to replace dunted, chipped, broken and slagged-up firebricks. As well as chipping out lumps of built-up slag and ash glaze deposits, that if left unattended, will eventually flow like lava into important air inlet holes and seal them over, causing trouble during later firings. I get stuck into it with the skutch hammer and cold chisel. 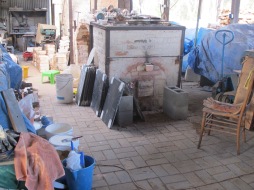 Some years ago I didn’t get around to doing sufficient firebox maintenance, skipping a maintenance session, as we were very busy at the time. Unpacking the kiln and re-packing it ready for the next firing. But then, during that firing, towards the end, at the highest temperature, a lava-like flow of ash glaze came pouring out of one of the floor-level air-inlet holes. It pooled onto the floor into a sluggish, thick, brown, viscous, turd and piled up there, before freezing at room temperature. I kept that ceramic turd on the pottery window sill in front of my wheel for a few years. It disappeared when our pottery burnt down in 1983. It hasn’t ever happened again.

A while ago, I collected all the chipped out fire box floor ash glaze slag and crushed it up and ground it in my ball mill, into a fine powder, then made a glaze test out of it. It would have been a lovely completion of ‘joining the circle’, kind of thinking. But tragically it was so very dark and dull and brown and slightly crystalline, that I couldn’t find a use for it on my work. So, going on the theory that a skutch in time saves nine. We get stuck into the job at hand. Which is cleaning and rebuilding the worn bricks in the firebox. It’s not a very nice job, but has to be done, and needs to be done NOW! 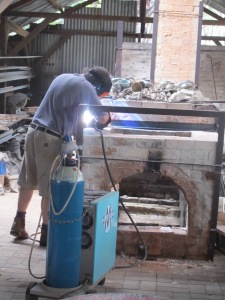 However, Like all jobs, it expands and as we work. We realise that it would be far better and more economic of our time and efforts, to do a lot more rather than less, while we are at it. So we take down a lot of the fire box brickwork and re-design the ratio of hobs to ash-pit, to test out an old idea that I haven’t tried before. It is interesting to me that after building and firing well over a hundred of these kilns, for individuals, Potters Groups, TAFE’s and Unis, both here and overseas, there are still some variations and combinations of factors that I still haven’t tried. This idea needs to be tested. So off we go. It’s a new adventure now, and becomes more interesting because of it. It takes us two days to pull it down and brick it all back up again, then re-weld all the metal bracing, so that it is well supported during the stresses of the high temperature stoneware firing. 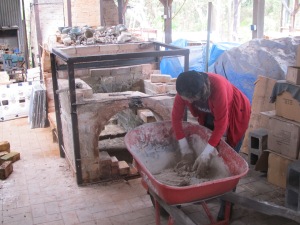 Ms Versatile is a very competent brick layer afters all these years of practice. We have built so many kilns together. Both here and overseas. I don’t know how many bricks we have laid together, but it must be in the many, tens of thousands. 900 to 1500 bricks per kiln, and over a hundred wood fired kilns built on-site in 40 odd years. When we first came here in the seventies. We were building our kiln when the local bull dozer driver called in to see about digging our dam for us. He walked into the pottery and saw Janine laying bricks on our kiln by herself. He stopped dead in his tracks and did a double take. Then said. “F%&k me! Now I’ve seen everything, a chick laying bricks”!

It was an usual sight in those days to see female bricklayers and he was a bit of an unreconstructed chauvinist.

We’re still at it. Nothing’s changed! 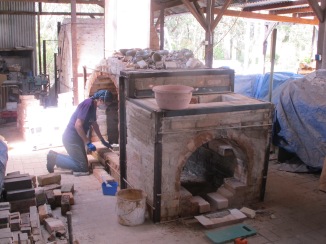 The renewed, slightly lower firebox. All finished and ready to go for another year..