Skip to primary content
I love the completeness of it all.

We have had all our firing partners back again for the unpacking of last weeks woodfiring. A lot of nice pots come from the kiln and everyone makes a line of human-chain to pass them all the way to the top of the kiln shed. It’s a slow process, as each and every pot is examined and discussed all along the way.

These potters have helped pack the kiln with all of their own work. They have stacked the wood and stoked the fire. Shared meals together and stayed up all of the night in shifts to see the firing successfully reach the bright white heat of stoneware temperature, then fired down to a safe state, where the kiln could be left to cool un-attended.
Now we are all back together again to experience the un-bricking of the door. Cleaning and carefully stacking all our home-made, hand-made, fire bricks, then carefully sorting, cleaning and re-stacking our kiln shelves and home-made props. Together, we share the delights and disappointments of the results. Fortunately, nearly everything comes out really well. There are so many beautiful pots here. We have experienced the completeness of the firing cycle together.
This isn’t ‘virtual’. It’s real, gritty, up all night, bags under the eyes and soot on the sleeves reality. It’s just one part of our attempt at a sustainable process here. The wood for most of this firing was cut just 20 metres away from the kiln site, where we are now growing potatoes, down below the pottery. 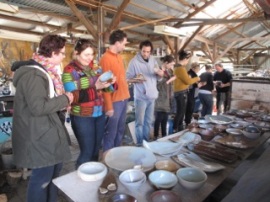 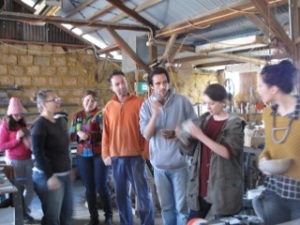 Janine, The King of Glaze Testing has her own special moment, when her ‘StONeS of beaches’, glaze test tile emerges. The Princess of Pumice, she has tested the new pale ‘wild’ beach pumice with limestone in known and reliable recipes as a control against the same pumice fluxed with cuttlefish ‘bone’ from the same beach and mixed to the same recipes.
There is no discernible difference between the mineral ‘Whiting,’ calcium carbonate powder and the ground up cuttlefish bone powder. They have behaved identically, if anything the cuttlefish is purer and whiter than the limestone.
We are satisfied that cuttlefish bone is composed of calcium carbonate. We are also very pleased to see that the glaze is quite stable and a lovely mid to dark bottle green celadon. We will call it our Sealadon glaze. The third test on the tile is straight pumice and it looks like it will be quite good just by itself. So further testing is in order. I love the completeness of the idea that we can make a total stoneware glaze from the sea, just picked up off the beach in front of our friends house, like so much flotsam. I suppose that if the glaze needed some extra quartz, we could use the sand and fire the kiln with drift wood? I like it. 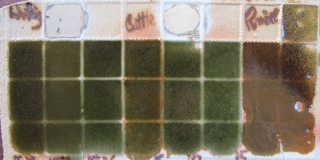 Just to make it a complete series, the Queen of Quadaxials has mixed all seven test samples together and glazed one of my small coffee cups with it. It has turned out terrific, so now we have a new cup with added meaning in the kitchen. ‘StONeS of beaches’ glazed short black.
The beautiful potter is already back in the pottery making some pots to try this new glaze on.

Although we only have glaze tests in this firing, I am feeling quite good about it. Isn’t it amazing how something so small can have such an effect? We rarely get out of the kiln what we packed in. We pack our pots in there to be sure, but we also pack in all our hopes and dreams, but all we get out are cups and bowls. So when there is something else that has that ill-defined promise of potential, then that is a real reward. I was interested to see what the effect of cuttlefish fluxed pumice would be and now I know. It has a completeness about it that is very sustaining and intellectually rewarding, not to mention frugal.
Meanwhile, in the orchard, the almonds have just burst into blossom. Spring is almost here.

The over-winter trial of potatoes down in the ‘Pantry Field’ garden are doing well and have managed to avoid the frost so far. I’m hoping that we will be able to get away with it. Not that it matters. If they don’t thrive or even survive, then that is just the way that it is. They would have died anyway if we hadn’t planted them out. We’ll plant more in spring.
We are forecast to have more frosts this weekend, during our next overnight wood firing, brrrrr!
Where we have situated this garden, seems to be quite well protected in amongst the tall trees. There are also some remnants of the cottage garden flowers still lingering on down there.
A big surprise yesterday, was to find a few really nice, big plump mushrooms growing in with the potatoes. It isn’t all that surprising, as we used a ute load of spent mushroom compost to fertilise this patch of garden when we planted these potatoes in late autumn. There are more mushrooms emerging as well, with some other larger ones coming along as well. We picked four of them and had a mushroom risotto for dinner. 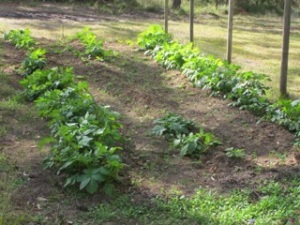 Fond regards from the complete Mr cephalopod fluxed ignimbrite and his Regal sealadon glaze tester, who compliment and complete each other.