I heard a couple of young designers talking about sustainability and recycling, as if they had invented it.

Aparently, it’s the new hot topic in design. It’s so interesting to listen to young people talk about things that they know very little about.
I must have sounded like such a twat when I was young  –  and probably still do for that matter.
These people were talking about sustainable design as a ‘feature’ of design. It wasn’t the effect of consumerism, or its consequences, that was of interest to them.  It was the look of things. It was all about design and The Look!
Real sustainability didn’t seem to be the core issue.
Being a baby boomer, I grew up through the sixties and seventies and was very involved in the ‘do-it-yourself’ kind of sustainability. The grass roots approach.
When I met ‘The Lovely’ at Art School and we set up house together in a flat in Bondi, I promised her, not a lovely home or plain comfortable house, not even a shed. I knew that I would never be able to buy a house earning the sort of money that potter could earn, so I was only looking for vacant land. I initially promised her a life in a tent!
Fortunately she said OK! Count me in! She didn’t mind a bit of hard work.
I thought that I would find some little piece of bushland and pitch a tent while I built a mud brick shed, a pottery, a kiln and then, at a later date, a house.
This was what a lot of people did here in Australia in the past. Especially the returned solders in the post war period. My own father bought a vacant bush block and cleared it with a mattock, and hand cut a track to get trucks to the site. Then we all lived in a caravan for a year while he built the first two rooms. After that, we all lived in that cramped building, while he built the next few rooms. The house was only just finished a few years before my older brother left home.
Everything was paid for, bit by bit, as you went along. There was no credit, or ‘LendLease’ in those days. No plastic card credit.
I was interested in living what I thought would be a less-complicated life. I was wrong. All lives are complicated. However, in my youthful enthusiasm. I considered that living directly on the land and eating from the that land as much as possible by way of gardens and orchards, then making pots to sell that were made out of the land, should all be doable. Well, as I said, I was naive and full of youthful hubris. For someone interested in DIY sustainability, the obvious choice was to build with earth, dug free from the land and turned into capital by sheer effort and will power. Creating capital out of virtually nothing is a pretty neat trick. So all but one of our buildings are made from mud bricks. Of course, keeping chickens and ducks and eating the vegetables that we grew ourselves in an organic garden were all part of that daydream.
Well, it all came true. It wasn’t a dream. It was made real by dogged hard work of two dedicated people who teamed up and concentrated in a single-minded effort to make it reality. Of course it didn’t all happen as planned. There were detours and setbacks. Lots of little hiccups along the way. But we made it happen. Janine turned out to be one hell of a tough girl. I’m so glad that she accepted my offer. And as it turned out, we didn’t need the tent.
A kiln was built and pots were made and sold, but we always had a big vegetable garden and one of the first things we did, was to plant fruit trees for the future. Once we were a little more secure. I made pots and glazes from the raw materials that occurred in the landscape around us. It took time to research and uncover all the potential of the local geology, but bit by bit, I found one material after another that I could use to replace a previously bought ingredient in my recipes. These days we buy very little, but I do still buy some ingredients that are very hard to find, or make from what we have here to work with, like bentonite and alumina powder. Recently, I have even bought some plastic kaolin to add to my mixtures to make them a lot more potter friendly on the wheel.
Unlike young designers in the inner city, we are not interested in ‘The Look’ of things so much as the reality in total, their cost, both in money terms but in particular the cost to the environment, their carbon debt and their running costs. That is why we have chosen not to own a big car, an air conditioner, a microwave, a large plasma screen and other energy hungry appliances. So we don’t have The Look, we have chosen not to buy into it. We have a busy sustainable life which takes a lot of time and personal effort  to maintain. We just don’t have enough time or energy to have a real job to pay for ‘The Look’. We’ve ended up with the blisters, the gritty, real, sustainability part, but without ‘The Look’.
One very good outcome of all this DIY, is that we don’t have a mortgage and we can afford to live this small life.

In the garden, the cauliflowers are in full flower just now, so we are finding ways to use them up. One of our long time favourites is to cut it into bit sized chunks and eat it raw dipped in aioli made from our own garlic, lemons, local organic eggs and locally produced olive oil. Thats an entrée that is worth waiting all year for. It’s just terrific, great flavours and textures. Almost a meal in itself. 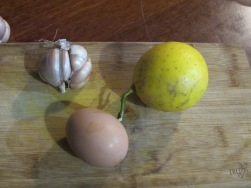 Aioli
1 egg
1 lemon
1 cup of olive oil
5 or 6 or 10 cloves of garlic, depending on size.
Chop up the garlic and add the egg, whip it up into a thick yellow frenzy with half of the oil and the lemon juice, lastly add the remaining oil and mix it into the emulsion, add pepper to taste and a little salt if you like. I don’t.
If your eggs are small, use less oil, or add a second egg.
At the end of the summer, we ended up with a silver beet ‘tree’ that grew on the edge of the garden path. It grew as tall as me and finally had to be held up with a tall wooden stake. It finally ripened its seeds and the wind blew them all over the garden. We now have loads of the green stemmed silver beet growing everywhere. I’ve been mowing it to keep it down to a manageable amount. The Lovely transplanted a dozen or so seedlings into a bed, where they will be safe from my whipper snipper and garden chipper hoe. 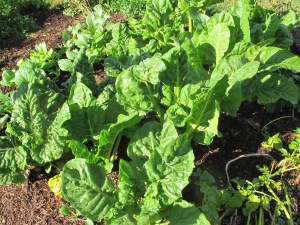 They grow so fast at this time of year, so we have to find ways eat it with out getting too bored. The usual way is to just scorch it in a fry pan and sweat it down to a small warm mass. I believe that it’s called ‘whilted’ spinach. What is nice about it is that it doesn’t involve any oil or even water, just some heat. We serve it with a little lemon juice or alternatively with a dash of white wine vinegar. It seems to go quite well with most things that we eat. 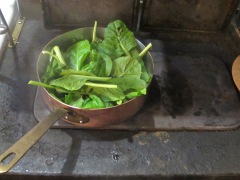 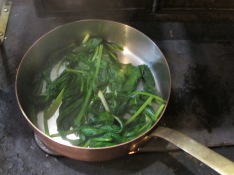 Because these plants are so prolific just now we are constantly trying new ways to use it up. Not unlike the situation with zucchinis in the summer time.
It makes a lovely fresh side dish that is really quick to make and no washing up. just rinse the pan and it’s back up on the hook. A more substantial dinner at this time of year that is warm, satisfying and low fat is spinach and ricotta pie. 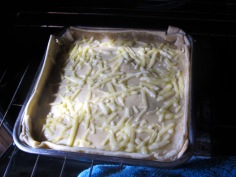 Wilt the spinach, as above. You can make ricotta very easily from milk that is past it’s use-by date by heating it gently and adding some lemon juice to it. It will separate into curds and whey, drain off the whey and add the curds to the spinach and place into the pie crust, cap it off and add a little grated cheese and /or brush with the whey or milk to get a nice brown top.
Janine was given a really simple recipe for pastry from Marta Armarda, a ceramic artist from Spain, who was in residence at Sturt workshops in Mittagong.
http://www.martaarmada.com/
Marta’s recipe for pastry is quick and easy – and foolproof!
1 tbspn oil
2 tbspn water
2 tbspnwhite wine
Add enough flour to make the correct consistency, which is about 1 cup, but this will vary with the choice of flour.
This amount makes enough for a spinach pie. 30 to 45 mins in the oven at 160 to 180. Until it browns and looks right The wood fired kitchen stove doesn’t have a reliable temperature measurement , and it depends whether the fire has been going all day, or whether it has only  been lit for a few hours.
We have completed 2 of our 5 wood firing, weekend workshops and had work shown in the Manly Regional Gallery and at Ivy Hill Gallery down the south coast to coincide with the International Wood firing Conference. I couldn’t afford the time to go for the whole thing, but managed to get down there for a couple of days. So now it’s back into the workshop to start throwing more work. I have shows coming up in Singapore and Taiwan in the next few months, so I need to get productive. 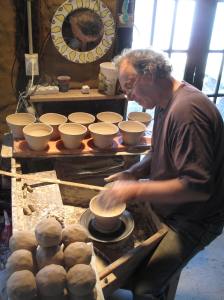 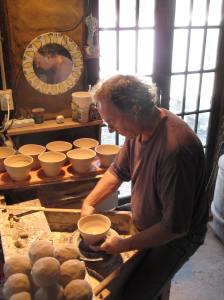 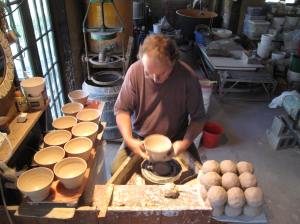 The Lovely, catches my visage in the mirror, so that it shows my bald spot.
It’s not a good look.
Its not ‘The Look’ either.
It’s just a look and that’s how I am.
Best wishes from the thinning potter, and I don’t mean waistline, and his happy snapper