It appears that I lied.
That wasn’t the final episode of my Korean sojourn, The Kim Chi Chronicles. It was only the penultimate instalment. There is a coda to follow the Epilogue. I got here to find that all my parcels had arrived home safely, most of them before I did. The Korean Postal Service is very fast and efficient! I now have the largest collection, if not the only collection of glazed and fired, single-stone porcelain pots in the world – as far as I know. During the coming year I will make pots out of the stones that I have shipped back here to complete my show of  ‘5 Stones’ to be held at Watters Gallery in East Sydney, next August.
I want to have pieces that I have made on-site in all these various countries around the world, as well as pots made here in my workshop from the same materials and fired in my wood fired kiln here. These pieces will have some unglazed areas on the outside to show the effects of wood firing and surface flashing. I have already started this part of the show with the clay bodies that I have shipped back from earlier trips. There only remains the 2 places from this last trip to Korea, via my quick few days stop-over in Cornwall. If the last few firings of unglazed, wood-fired porcelains, are anything to go by, I can have great hopes for the next few.
The rough ash-laden surfaces of the unglazed pieces near the front of the kiln are completely different from the clean, white, fully glazed surfaces of the gas-fired work, that was made on-site in the local potteries, where these stones were found. I think that they will be a great foil to each other and show the full potential of the materials in different hands. I intend to preview a limited number of these pieces from the different sites at home here during the Southern Highlands Open Studios Weekends. We will be open on the first two weekends in November. 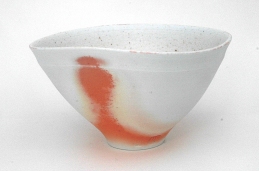 I’m very fond of the way that my own local porcelain stone with it’s peculiar surface reactions to wood firing, has the ability to turn both red/orange with the wood fired flashing effect and also jet black with carbon-inclusion, both at the same time, when fired in my kiln. I’m keen to see how these latest acquisitions respond? 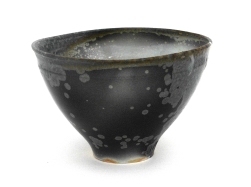 I have so many fond memories of Korea now and some friendships that I would like to continue with.  Over the time that I spent in Korea, I was encouraged to learn to use the Kakao Talk app. This is the phone app that everyone uses over there. I have since learnt that it also does a really good instantaneous job of translation. I only have to just touch the screen with my finger and the Korean text message magically appears as English! That’s pretty clever. The translation is better than that from Google translate. I copied it across and tried it out on both, Kakao Talk does it better. i.e., making more sense. There are always some words that don’t work, but I can guess the meaning from the context. 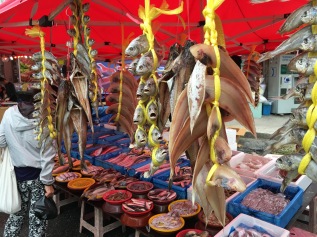 So I am now in a continuing, intermittent dialogue with my friends over there. I also discovered a lot of photos that people over there had sent me on KakaoTalk. I spent an hour in the street markets in Yeoju with Jun Beom and Mia. Suddenly I find that they have sent  some images of me at the markets. That was a nice surprise.

I really like street markets and street food. There is always something special or even fantastic to surprise and amaze. Like dried fish, all beautifully bound and hung in vertical streams and a man making cigarettes one at a time in a small semi-automatic tobacco rolling machine. I have no idea how he was selling them. He appeared to be assembling them in boxes of 100 or 200, not  too sure. But maybe you could buy them in bundles by weight, singularly or by numbers  like 20. I don’t know, because no one bought any while I was there. I believe that smoking is bad for you. There is no longer any doubt in my mind, even though the tobacco lobby is still insisting that there is no problem. It doesn’t cause cancer and that it isn’t addictive. It’s just like the fossil fuel lobby, currently still claiming that fossil fuels don’t cause any global warming. They have vast wealth to throw lawyers at the problem and sue the pants of any government that tries to stop them.

Capitalism is good at lots of things, but in my opinion, any one who owns shares in a tobacco company has no ethics and should be ashamed of their greed. Profiting from death and disease is nothing to be proud of. I understand that there is still one or two tobacco companies that are continuing their legal actions the Australian Government over our tobacco marketing and advertising laws.

On a brighter note, the amount of chilli for sale in the market was amazing.  As soon as I entered the street where the stalls were. The first thing that I noticed was the sting in the air of chilli dust. I could smell it. It was in my nose and eyes long before I could see any of it for sale. There were a few stalls that were busy grinding the whole chills into powder. I noticed that many of the workers de-heading the chills, before they were being ground, were working bare-handed. No gloves. I sincerely hope that they don’t get an itchy eye and want to rub it. I’ve been there and done that and lived to regret it. I’d like to say that I learnt and that it’s the sort of thing that you only do once. But regrettably I can’t. I am a repeat offender, or slow learner. I’ve discovered that even an hour or two later, my fingers are still quite lethal anywhere near my eyes. 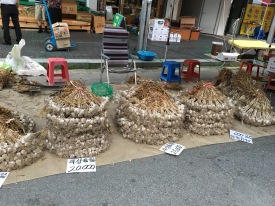 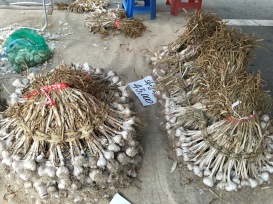 I was particularly taken by the beautiful presentations of bulk garlic. As a garlic grower, myself. I’m always interested in seeing how different cultures present and store garlic. These were really big bundles, beyond plaits. They were bound up using rope!  These big bundles of garlic seemed to be for sale for Au$23 A bargain! 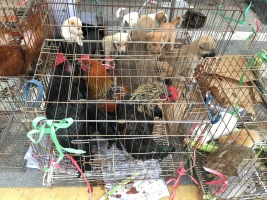 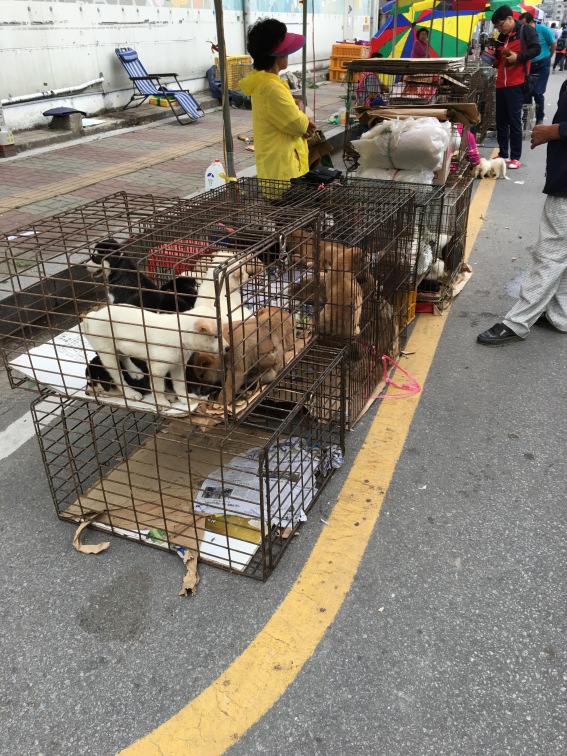 There were also chickens and even puppies for sale. It’s always wise to remember that a puppy isn’t just for Christmas. It could be for dinner!
Best wishes from Steve, now safely home again in Australia.