Through the cooler months of the year we plan to eat some red meat about once a month, but after I returned from China in May, where I had meat in everything. It seemed that every meal I chose seemed to contain some small amount of meat or more probably offal. I got a bit over it, so I thought that I’d skip meat for a while. Then when I was working in Japan in August. I seemed to get invited to a lot of BBQ’s or  ‘celebration’ meals that involved red meat. This was quite an eye opener for me, as I remember when I first went to study in Japan in the early 80’s, I hardly saw any meat for sale, never mind eating any. Now, 5 trips and 35 years later. The supermarket fridge displays are loaded with just as much red meat as there is fish. How things have changed.

Since I have returned, I haven’t been to the butchers at all. It’s now 4 months since I had any meat. I just haven’t felt like I needed any. I’m NOT a vegetarian. I eat what my body tells me that I feel like eating. That is mostly fish and fresh vegetables.

So, at the weekend I was over at the Village Hall, where I am one of the trustees. We were there for the Village Xmas Party. At some point I casually mentioned to my neighbour John, that this fund-raising sausage sandwich was the first ‘supposedly’ red meat that I’d had in months. I’m giving the local butcher the benefit of the doubt here in crediting him with actually putting some small quantity of meat in his sausages, although from the pale creamy/yellow colour of them. I can only imagine what else might be in there, and I’m pretty certain that it isn’t meat. At the butchers, I notice that those pale anemic things are called sausages, while the red meat filled intestine tubes all have other exotic names like ‘bratwurst and salsiccia’.  I asked why and was told that it is illegal to call anything with that much meat in it a sausage. The laws governing ‘sausages’ are strict and you can’t put very much meat in them. I didn’t dare ask what is actually in them, but I suppose that it is mostly fat, gristle and bread crumbs?

Anyway, My neighbour John was shocked, appalled and quite taken aback at this fact and looked at me after my ‘confession’ with that pitying look that said “You poor, hapless, tragic bastard”! He was polite in not actually saying that to my face. But his face said it all. He asked me, “What do you eat when you aren’t eating raw vegetables then”? I told him that I fast 2 days a week!

His eyes rolled back in his head!

He said. “Come to dinner tomorrow night and I’ll feed you up”!

We duly turned up with our bottle of red wine. A very nice one in fact, and were treated to an exceptionally nice meal of medium rare, fillet steak in pepper cream sauce, served with a side of diced peppers and mushrooms stir fried in butter and mash potato made with lashings of salt, butter and parsley. It was sensational! John knows his steak. He also knows how to ‘read’ me. He knows I don’t often eat red meat and along with that he guessed I rarely buy cream, I never use salt and hardly ever use much butter. And he is right. So he decided to slam dunk me with the full trifecta.

And I’m glad he did. It was delicious.

In our turn, we invited them over for a nice salad and a glass of rain water, or maybe a few slices of sashimi and a bowl of green tea! 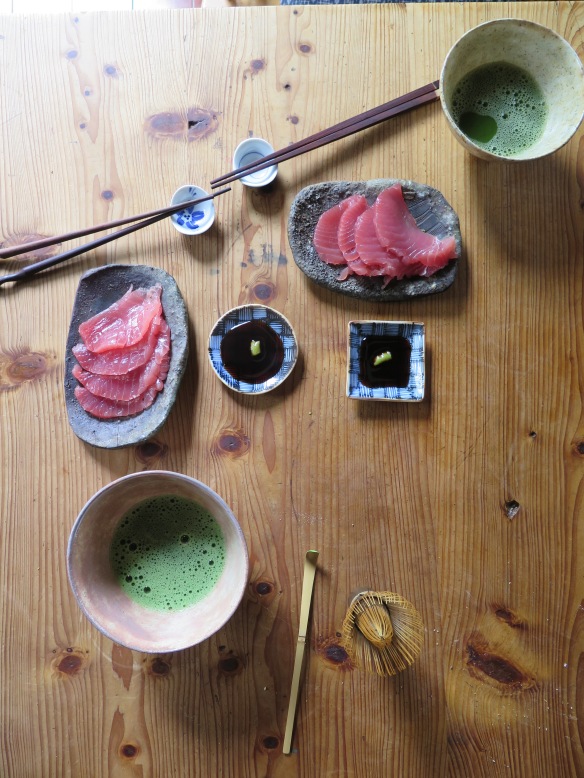