We have just been to a local house concert to see Heath Cullen again. He’s particularly good. I like his music a lot. We already had both of his earlier CDs and they get quite a lot of amplification around the house and pottery workshop. Heath has a new CD about to be released. it’s been coming for some time now, like a slow train.

We spent the afternoon yesterday letting his music wash over us and I am particularly grateful for the opportunity to be able to sit and listen and take it all in at such close quarters in such an intimate location. Now we will have the new CD playing on high rotation for the coming week until we get ‘inside’ the music.

This new CD was recorded with Elvis Costello’s band, The Attractions, when they were in Australia last year. 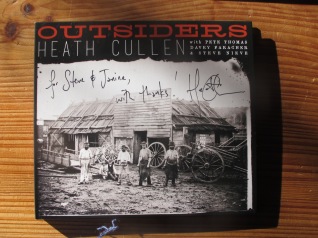 I wrote about Heath Cullen on this blog about 18 months ago;
At that time I described his music as;
“He’s like the love child of Nick Cave and Paul Kelly – if that were possible? With the breathiness, but sans the basso profondo, of the gentler side of Tom Waits. That sounds like a very strange description, but I think that it is kind of right”.
I think that this is still as good a description as I can come up with. Words aren’t the best medium to describe music, but it’s all I have. You’ll just have to google him and make up your own mind.
<http://heathcullen.com>
I reviewed one of the songs from his second CD in a post on this blog about a year ago.
<https://tonightmyfingerssmellofgarlic.com/2014/05/20/im-a-clarevoiant-and-what-do-you-do/>
‘Silver Wings’ is still my favourite song of his. That hasn’t changed over the year. On his web site you can preview songs from the albums, or even buy just single tracks or the whole album. Check out silver wings.
On the bottom of his web page, I see that he has the tags; alternative avant-garde blues country-alt rock rural Australia
So that is how Heath describes his own music. I still prefer my description.
Best wishes
Steve